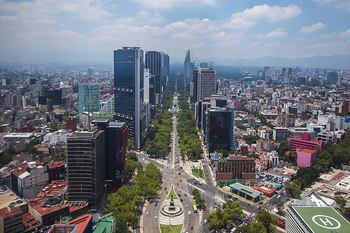 It runs neck-and-neck with São Paulo as the largest city of the Americas, and is also the largest Spanish-speaking city in the world, and the economic and cultural heart of Mexico. The city has seen many of the most important events that happened in the history of the country, and perhaps the one that has the most beautiful historic buildings of the country.

Mexico City is notorious for its smog, not aided by its relatively high altitude and location inside something of a circular valley (which means smog can easily get "bottled up"). It is also famous for its traffic snarls, despite a fairly modern and well-run metro system that connects most points of touristic interest. To combat both those problems, city government often issues (somewhat controversial) "Hoy no circula" laws, limiting which cars can and cannot drive. However, this leads to rich inhabitants having several cars "just in case" so they can drive one of their cars regardless of which number plates are currently allowed on the streets.

Mexico City has played host to various films: Dune (1984), Conan the Destroyer, Licence to Kill, Honey, I Shrunk the Kids, Total Recall (1990), and Kung Pow! Enter the Fist. Reports are often that the Mexican authorities make things hard for the foreign production crews.

Mexico City is a really big place. Its extension covers not only its municipal limits (much like Washington, D.C., Brasília, and Canberra, it's outside of the country's system of states), but it additionally covers half of the State of Mexico, and a very small part of the south of the state of Hidalgo. The city keeps growing, and it will continue to do so until the future, unless an eruption from near volcano Popocatepetl can stop that, though it is unlikely. Chilangos are both stubborn and numerous, and despite their poor reputation among other Mexicans, they can join forces to clean up and rebuild after natural disasters. Most notably, this happened after the earthquake of 1985, and the less strong but still very destructive one of 2017, both of which took place in September 19th.

The city is divided into 16 Delegaciones, which are as follows:

The name of this delegation comes from an old náhuatl word roughly meaning "Place of Coyotes" or "Coyote Owner's Place". Like many other parts of the city, Coyoacán used to be a different town from Mexico City all together until the city grew towards it and swallowed it. For the most part it's filled with picturesque, colonial-style buildings and plazas full of trees and benches to sit on. Nowadays, it's seen as one of the most bohemian parts of the city, popular with New-Age Retro Hippie -types and a few other subcultures. It also has a history as a hotbed for artists. Coyoacán was the birthplace of painter and feminist icon Frida Kahlo, as well as the site of her house and studio, La Casa Azul ("The Blue House"), which still stands today as a museum dedicated to her life and work.

Coyoacán was also home to Bolshevik revolutionary Leon Trotsky after he was exiled from Russia. He maintained an affair with Kahlo (who was notably popular with men and women, despite her fragile health and unorthodox appearance, which she was actually quite proud of) until he was assassinated at his house, which is also a museum.

Mostly famous in and outside of Mexico as a City of Canals of sorts. Xochimilco struggles to keep its lake and canals clean, but constant littering and a whole bunch of invasive water flora have pretty much made this efforts moot (At some point, they actually introducedmanatees to eat off the excess of water plants off, but this effort failed when locals killed them not knowing what they were... and promptly ate them). The water is now rather dirty, and its ecosystem is in danger. Scientists fear that the Axolotl, an amphibian animal that used to call the lake home, has all but disappeared from it, and may now be extinct in the wild.

The canals are a common tourist attraction, with visitors being able to hire trajineras (small, brightly painted boats) to have a leisurely trip around the canals, where they can buy food or listen to mariachis from other boats. It's generally safe (the canals are not really deep, in case someone falls), but people should be wary of clumsy trajinera rowers accidentally ramming the boats into each other or, God forbid, people.

Another very famous attraction is La Isla de Las Muñecas, the Isle of the Dolls. According to the story, in the 1950's a girl drowned in the lake, and her body washed up on the shores of a small, artificial island called a chinampa. The owner of the chinampa, one Julián Santana Barrera, was reportedly horrified by the event, and started to report odd paranormal happenings in his island, where he lived. Believing it would protect from/scare away the evil spirits supposedly tormenting him, Santana started nailing hundreds of dolls all over his property, on trees and buildings. The island soon became a rather ghastly sight, filled with old and dilapidated dolls of all kinds, colors, shapes and sizes that Santana presumably found discarded in the water or bought himself. Santana eventually died, and the island is now uninhabited, but morbidly curious people can still visit to see the dolls, which are still there (and they probably know where you live now).

Finally, Xochimilco was one of the most badly affected zones of the city following the earthquake of September, 2017, due in no small part to the fact that the terrain is marshy and rather shifty (a problem that affects several parts of the city because it is built on top of a lake, but is particularly severe in Xochimilco, since a good part of it is still composed of canals, lakes, and marshland). Several neighborhoods fell apart, leaving people homeless. A particularly high-profile case was the collapse of a bridge at the Mexico City campus of El Instituto Tecnológico y de Estudios Superiores de Monterrey, or Tecnológico de Monterrey for short (roughly translates to Monterrey Tech, a prominent private university in Mexico with campuses all over the country), located in Xochimilco. At least four students died, sparking up outrage and accusations towards the university of being guilty of the incident through neglect (the bridge that collapsed was the only exit from one of the buildings it was attached to, and complaints about damage to the structure were reported weeks before the earthquake, after another, smaller earthquake struck the area). Despite this and several similar incidents, the people came together to rescue and rebuild, and reconstruction efforts are still underway.