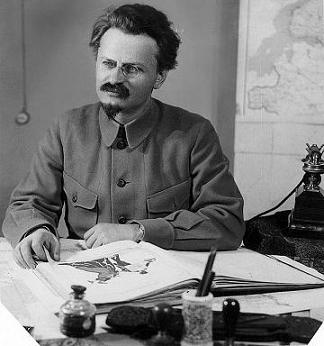 Leon Trotsky (7 November [26 October in the Old Style Calendar] 1879 – 21 August 1940), born Lev Davidovich Bronstein, was a Soviet Bolshevik revolutionary and Marxist theorist. Before the Revolution he mostly hung about in exile in Siberia, briefly part of a political group known as the Mensheviks and then later the Mezhraiontsy, a group that sought to reunite the Bolsheviks and Mensheviks. After the February Revolution Trotsky joined the Bolsheviks and became Lenin's second-in-command. Trotsky was one of the leaders of the Russian 1917 October Revolution, head of the Military Revolutionary Committee and planned the strategic takeover of Petrograd. During the early days of the Soviet Union, he served first as People's Commissar for Foreign Affairs and later as the founder and commander of the Red Army and People's Commissar of War. He was a major figure in the Bolshevik victory in the 1917–1922 Russian Civil War and Kronstadt rebellion. He was also among the first members of the Politburo, an internationally respected intellectual and a man of great personal charisma.

By temperament and personality Trotsky was not a shrewd politican, but an outspoken civil bureaucrat. His disdain for political intrigue and refusal to compromise his principles meant that he accrued little support and much opposition. Given this, the Sovietologist Stephen Kotkin opines that after Lenin's death, even if Stalin had died then Trotsky would not have been able to assume effective control of the Soviet Union. It is worth noting that Trotsky also believed this for a different reason, as he viewed Stalin as a mere representative of the bureaucratic degeneration of the Soviet Union, and so the bureaucracy would have found someone else in Stalin's absence.

As Lenin's Number Two, the low level bureaucrats resented Trotsky's arrogancenote He was quite famous for sitting in Politburo meetings, getting bored and reading French novels in the middle of sessions, ignoring the raised eyebrows of everybody else in the room, and like many other Old Bolshevik leaders would refuse or reject assignments he felt were beneath him, were jealous of his closeness to Lenin, resentful of his quick rise to the party elite over more long-serving and committed members, fearful of his skills as a military organizernote Bolsheviks during the 20s would mutter that Trotsky would become a Napoleon of the Russian Revolution and Stalin later hijacked this for his propaganda during The Purge of the Red Army; all of which coupled with the habitual anti-semitism among some of his peers meant that he had a tough time winning popularity contests. note  In this, he is comparable to Alexander Hamilton, another brilliant administrator whose personal failings and flaws were balanced by the support of the Revolutionary leader and figurehead but who was never able to build a separate career independent of his sponsor's shadow.

Trotsky was never able to build a proper constituency within the Politburo, not even with those who might have been sympathetic. The so-called Left Opposition of Kamenyev and Zinoviev at various times supported and opposed Trotsky and were skeptical of associations with him, since he was personally rather unpopular. Trotsky for his part, maintained the Red Army on a professional rather than clientelist basis, and this prevented him from using the army as a shield to protect himself. Trotsky's criticism of some of Lenin's policies such as the New Economic Policy didn't endear him to Nikolai Bukharin who was rather partial to it, and his support of world revolution at a time of consolidation found little favour among the more moderate members of the Politburo. His perceived inconsistencies and waveringnote he advocated party loyalty and iron discipline during the Civil War and the early 20s but later called for greater democratic participation and his failure to build an effective constituency to counter Stalin's skill in building a network of patronage and clients as General Secretary, played no small role in the latter's eventual triumph over Trotsky.

This power struggle and behind the scenes bickering happened while Lenin was still bedridden at his Dacha. Lenin and Trotsky were Vitriolic Best Buds at best, and Lenin admired Trotsky's skills as an administrator and an intellectual, as much as he regretted his political failings. In his final messages, Lenin warned the party against a split and insisted on unity between various wings and argued against polarization. Contrary to the beliefs of various Trotskyists, Lenin never explicitly named Trotsky as a successor, nor for that matter anybody else, although he was very upset at Stalin for being so rude to his wife. What Lenin did argue for was that various revolutionary organizations be made independent to serve as a check-and-balance. When Lenin died, Stalin famously tricked Trotsky into missing his funeral, which even Trotsky later admitted had no real effect in hurting Trotsky's reputation worse than it already was, but was indicative of their relationship. Trotsky was marginalized in various post-Lenin Soviet congresses, even stripped of his positions within the Red Army, and at one point was virtually unemployed. Eventually he and the Left Opposition allied more decisively against Stalin's policies in the 1920s, and the increasing role of bureaucracy in the Soviet Union. This time however, Trotsky was decisively exiled. First, he was expelled from the Communist Party, then exiled to Kazakhstan and then deported from the Soviet Union to Turkey. His allies in the Soviet Union washed their hands of him. It was in this period that the public memory of Trotsky's achievements in the October Revolution and the Russian Civil War started being altered in the public record.

In exile, Trotsky resumed his original career as an intellectual and critic. The rise of Hitler and his perception of the tepid response of Comintern played a part in his decision to form the Fourth International as an alternative to the Comintern, in support of world revolution, and likewise presenting an alternative and critique of the emerging Stalinist state and its growing repression. He wrote several books and articles about the Russian Revolution. In The '30s, while in exile in Mexico, Trotsky was even willing to testify to the House Commitee of Un-American Activities under Martin Dies about Stalinist infiltration and management in Comintern and other Communist parties, but he also hoped to use his testimony to criticize the Red Scare which led the Dies Commitee to finally decide against Trotsky's offer. Such actions however did not endear him to the global communist movement which largely bought into Stalin's propaganda that Trotsky was a counter-revolutionary. During The Purge, several of Trotsky's former friends and opponents within the Politburo were killed in show trials, and Trotsky was transformed in the Soviet Media as a secret mastermind. Trotsky was an early advocate that the Moscow Show Trials were coerced by the NKVD, he also opposed Stalin's non-aggression pact with Adolf Hitler in the late 1930s.

In 1940, after twelve years in exile in Turkey, France and Mexico he was finally assassinated at his residence at Coyoacán, by Ramón Mercader, a Soviet agent, who attacked him in his study with an ice axe which did not instantly kill him, but led him to attack his assassin before his bodyguards arrived. Trotsky insisted on sparing Mercader's life and having him arrested and questioned. In the hospital, Trotsky succumbed to his wounds a day later, dying at the age of 60. Trotsky's ideas thus form the basis of Trotskyism, a major school of Marxist thought that is opposed to the theories of Stalinism. He was one of the few Soviet political figures who was never rehabilitated by the government of Mikhail Gorbachev (though the ban on his books was finally lifted in 1989). He wrote many political and theoretical books, including an autobiography (My Life), a history of the Revolution, several anti-fascist pamphlets and a whole bunch of military writings. In his exile, he formed friendships with surrealist poets such as Andre Breton, Mexican muralists such as Diego Rivera and Frida Kahlo (with whom Trotsky had an affair).

His family life saw much tragedy, being a target of attempted Family Extermination by Stalin: After him being exiled from the Soviet Union, his surviving children all died one by one and every single one before him (his daughter Zinaida committed suicide in exile in 1933 after being told she wouldn't see her daughter again; his son Sergei Sedov died under unclear circumstances in Siberia in 1937, and his son Lev Sedov died at the hands of one of Stalin's agents in 1938). The definitive biography of Trotsky, a multi-volume set by Isaac Deutscher, is considered a masterpiece in the genre. Trotsky's own reputation as a historian and martyr was invoked during the Cold War as an authority on Stalinism. Later historians argue that aside from Trotsky's own biases, his understanding of Stalin's activities and personality was considerably limited on account of his exile and he gave far too little credit for Stalin's shrewdness and cunning. Ironically, it was Trotsky who first conceived of mass industrialization, a policy that Stalin co-opted and implemented (quite brutally it must be admitted). Historians wonder if Trotsky would ever have been a realistic alternative to Stalin within the Soviet Union, or if his own ideas could have been implemented in a far less bloody fashion than Stalinnote Post-90s, the general consensus, among neutral non-partisan historians, is that Trotsky was too individualistic and stubborn for party politics and that he was only ever effective as long as Lenin backed him. Even Lenin considered him a Troll.. As such he is a perennial favorite for counter-factual historians and even trolls.