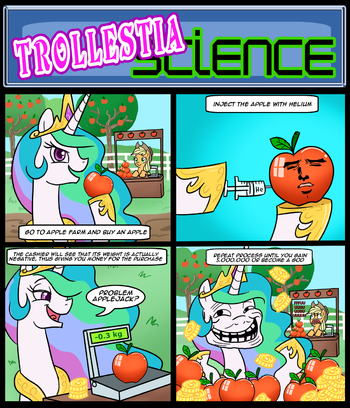 A slightly less dangerous (usually) variant of the Memetic Psychopath, the Memetic Troll is a character the fandom likes to depict as a Troll.

Quite often, the character isn't really a troll, but gets this reputation due to something he did or said in-story for no apparent other reason than screwing with others (such as neglecting a major detail about something in a situation where it would have been crucial) that cannot be attributed to his stupidity. It's also possible for the character to actually be a troll in the original support, but get this reputation exaggerated for laughs by the fandom. In any case, the character has a reputation of being a Troll that has become a Memetic Mutation.

Obviously an example of Memetic Mutation. Compare Never Live It Down. The Gadfly is susceptible to this kind of depiction, especially by those who don't know the difference between that and a Troll. Characters with god-like powers or spectacular scheming skills also have a particularly strong tendency to be subject to this trope, the former because this provides a good explanation why they don't use all their power to end the story quickly, and the latter because it is hilarious to imagine them manipulating entire groups of people just to pull pranks.