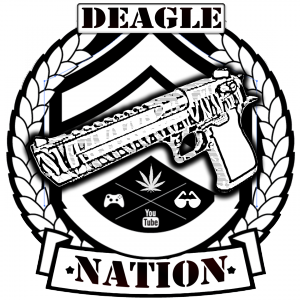 "Not just a gun, but a way of life"
Taahaaaa! Press 1 gamers!
—Jace "The Commander" Connors, frequently
Advertisement:

Deagle Nation is an elaborate web series created by Jan Rankowski. The series follows the exploits of Jace Connors, an out-of-work, highly delusional dudebro, and his band of similarly deranged comrades. Together, they found Deagle Nation, a gang allegedly dedicated to the ideals of gaming and the marine lifestyle. Needless to say, Jace's many attempts at looking cool repeatedly fail, often going catastrophically wrong and making him look ridiculous. It is a postmodern, self-aware indie satire like Trailer Park Boys or Jesus Chatline.

Noted for its convincing realism and its manic sense of humor, Deagle Nation's portrayal of its frequently contemptible lead characters has been cited as being highly reminiscent of past web series such as True Capitalist Radio. To say that Deagle Nation is absurd doesn't even began to describe the sheer insanity it frequently conveys, from Jace's long-winded rants about the Muslim forces conspiring against him to Tyce's exaltation of sekletons, Gail's bizarre religious convictions, and Eli's... and Eli.

For most of the time it ran, Deagle Nation was widely believed to have been genuine in its portrayal of its eccentric characters and their lifestyles. Following a revelation on Jace's true identity, it came to pass that everything that had transpired during the series was staged for the purpose of satire.

Although a lot of Deagle Nation content has been lost over the years, many streams and videos are available on an archive channel known as the Deagle Nation War Library.

Be warned though: the humor in Deagle Nation is consistently crass, dark, strange, and audacious. It's definitely something you shouldn't be watching at your workplace.

On August 18th 2015, Rankowski announced via Jace's Twitter that Deagle Nation was over. A return was attempted in the summer of 2016, with a new actor for Jace and featuring Rankowski as an over the top "soccer dad," but it got very little attention and has since been deleted from Rankowski's youtube channel.