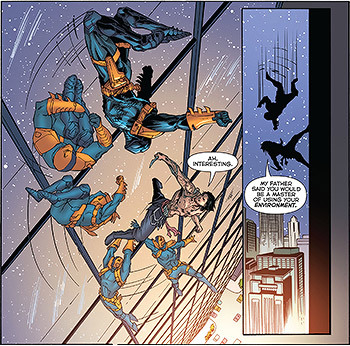 Forget him, you're standing on the side of a building!
Advertisement:

This is where someone in a battle begins to jump around and perform gymnastics-heavy moves in order to dodge bullets or other physical attacks. They will do back handsprings, push off of walls, do twists in mid-air and find safety without getting a single scratch. This does not make them invincible, just very hard to hit.

Usually seen with characters that are smaller in size, more flexible, and, more often than not, they will also have either a martial arts or some type of military background.

In fight scenes, this can be used to get characters from a position where they are at a disadvantage (usually out in the open) to a place of safety (behind a wall) or closer to their opponent for an attack. In addition, this style of movement is visually appealing and is used to add a bit of flair to combat scenes.

Sometimes this is used when a new character is introduced and they need to stand apart from the rest by having a unique skill set. If this happens, they may make an appearance as the Sixth Ranger, using this trope to show that they have considerable skill and coordination in comparison to other characters. Similarly, if this is a common tactic of a younger character (especially one that is hotheaded), the purpose is to demonstrate their physical capabilities and establish that this is someone with potential.

As this trope thrives on Rule of Cool, it may also involve use of Wire Fu and Bullet Time effects in live action shows and movies, to showcase every angle, and so the audience can keep up with all of the action.

Acrofatic characters and practitioners of She-Fu and Gun Fu are naturals at this trope. However, the character needn't be a martial artist to exemplify the trope, as the Gentleman Thief and Classy Catburglar are also prime candidates, when action-oriented. Characters who use Combat Parkour are quite likely to apply The Power of Acting to get an upper hand as well.

For an actual entry on Parkour, see the supertrope Le Parkour.

Steel, our protagonist, has to fight her way through a facility, making use of slides, wall-running and dives to dodge bullets.

Steel, our protagonist, has to fight her way through a facility, making use of slides, wall-running and dives to dodge bullets.