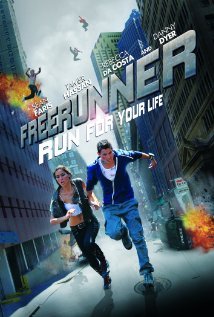 Freerunner is a 2011 film by Lawrence Silverstein starring Sean Faris, Danny Dyer, Tamer Hassan, and Ryan Doyle about a group of freerunners forced to join a deadly game. Ryan (Sean Faris) is a young man in Metro City who has a hot girlfriend, a menial job as a janitor, and an ailing grandfather. He also participates in a competitive freerunning contest organized by Mr. Reese (Tamar Hasan), especially against rival Finch (Ryan Doyle) where the participants have to collect three flags in various locations and make it back to the finish lines. Their progress is tracked by a combination of bodycams on the runners and webcams mounted along the likely routes. The rules don't outlaw physical altercations, so possession of the flags often leads to highly acrobatic fights.

Ryan chooses to break the rules and bet everything he has on himself in hopes of getting his girlfriend, Chelsea, and his grandfather out of Metro City. Unfortunately, in the process of enacting his plan, he and seven other runners are abducted mid-race and charged with another contest, a deadly one. Fitted with electronic collars loaded with explosives, they have sixty minutes to reach all three target locations. The winner will receive a million dollars. The losers will die. And, of course, the game is rigged...