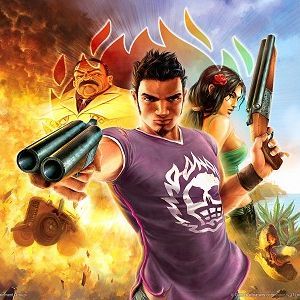 Take Grand Theft Auto, combine it with Max Payne, add in a ton of action movie tropes and Mexican stereotypes, and you pretty much have Total Overdose. The game might not be original, but it makes up for it by doing it's own thing and it sure is fun as hell.
Advertisement:

The plot involves the DEA, some Mexican gangsters, and drugs, but who cares about the plot, anyway? We're here to blow up cocaine burrito stands!

Total Overdose was created in 2005 by the Danish game company Deadline Games. A slightly more linear Spiritual Sequel / Remake was released for the PSP the next year, called Chili Con Carnage.

A sequel was originally planned named Total Overdose 2: Tequila Gunrise, but it was cancelled after Eidos Interactive pulled out of it and Deadline Games suffered poor sales from their the episodic title Watchmen: The End is Nigh resulted in Deadline Games filing for bankruptcy only two months after its first episode released. 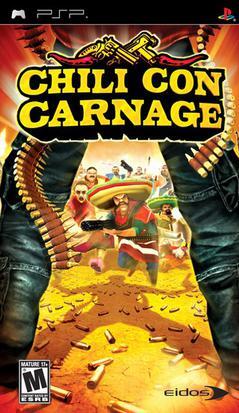 Cover Art for the game.
Chili Con Carnage is sort of sequel/remake to its predecessor Total Overdosenote (some reviews even classify it as both) released for the PSP.

Unlike its predecessor Chili Con Carnage drops the Wide-Open Sandbox elements (thus the Grand Theft Auto influences, yet the ability to drive vehicles is still around) and plays very closely to Max Payne with it's level-based design. The title was also developed by Deadline Games, then published by Sci Entertainment in Europe and Eidos in North America. There was a site

for the game, see also the page

on the Total Overdose Wikia.