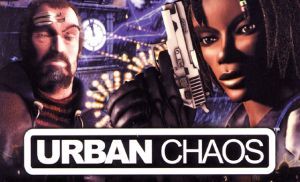 Brave men fought under the blood red sky. On the second day, the great battle would be over for these liberators, but the battle would once again commence on the black plains to the west. Where the Phoenix would rise once more, two warriors will emerge to face this foe.
Advertisement:

Urban Chaos is a 1999 Third-Person Shooter developed by Mucky Foot Productions and released by Eidos Interactive.

The story begins with Nubian rookie D'arci Stern, the protagonist, joining the Union City Police Department. Much of her time is spent dealing with the Wildcats, a gang that is getting increasingly bold in their criminal activity. With the help of a vigilante named Roper, D'arci begins to believe that the Wildcats plan to take over Union City. As the Wildcats grow ever bolder, D'arci discovers that the gang is led by Mack Bane, a candidate for mayor of Union City, who claims to be an immortal sorcerer with connections to Hell itself. It is up to Stern and Roper to stop him before he plays out the end of his prophecy.

As of 2013, the game is available on Steam but can do with some modding to run properly on modern computers.

Completely unrelated to the later Rocksteady developed Urban Chaos: Riot Response, despite both being published by Eidos.