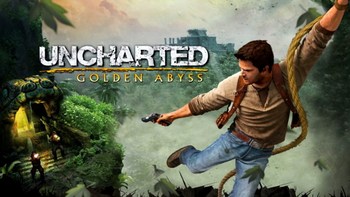 "I can assure you that in reality, Friar Marcos has not told the truth in a single thing he has said..."
—Francisco Vásquez de Coronado to Viceroy Mendoza, 1540 (opening quote)
Advertisement:

Uncharted: Golden Abyss is a side game for the Uncharted series. It was developed by Sony Bend, and was released on the 11th of December, 2011 for the PlayStation Vita.

Golden Abyss is set shortly before Uncharted: Drake's Fortune, and follows Nate as he helps Marissa Chase, a young woman determined to continue her dying grandfather's research. Along the way Nate finds himself clashing with his former friend, Jason Dante, who is out to steal the research for his own means, along with the formidable warlord Roberto Guerro who wants to use the treasure to fund his conflict.