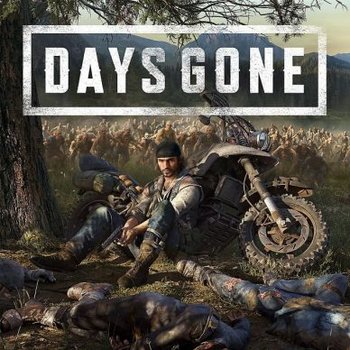 Think of this game as The Walking Dead, Sons of Anarchy, The Last of Us and World War Z combined into one game. Get the picture?
"Rivers do not drink their own water. Trees do not eat their own fruit. Clouds do not swallow their own rain. What great ones have is always for the benefit of others."
Advertisement:

Days Gone is an open world action-adventure survival horror video game released on 26 April 2019 by SIE Bend Studio for the PlayStation 4, with a PC port released two years later on May 17, 2021. It is the first intellectual property created by SIE Bend Studio since Syphon Filter in 1999 and the first home console game developed by the studio since Syphon Filter: Logan's Shadow in 2010. Unreal Engine 4 was used for the game development.

The game takes place two years after a global pandemic occurred which killed almost all of humanity, and transformed millions of others into "Freakers", mindless zombie-like creatures that are quickly evolving. The player controls the game's protagonist, Deacon St. John (Sam Witwer), a drifter and former bounty hunter who prefers to live a dangerous life on the road over living in wilderness encampments. In the E3 2016 stage demo of the game, two types of "Freakers" were revealed, Newts and Hordes.

As the game is set in an open-world environment, players are allowed to use multiple ways to complete objectives, such as utilizing stealth for silent takedowns or taking the aggressive approach by using long- and short-ranged weapons. A dynamic weather system and day-night cycle is also featured in the game, which affects gameplay, making "Freakers" weak and slow during the daytime, but fast and aggressive during the night. Vehicles such as motorbikes can be used to explore the game's world. Players are able to craft new items to improve combat efficiency.

Days Gone contains tropes such as: