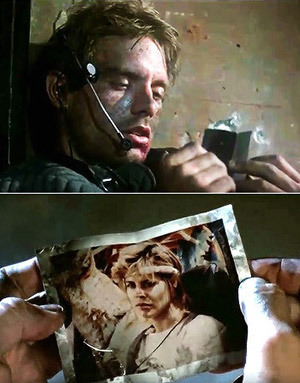 "I don't see the big picture. I have a little picture. I take it out and look at it... every day."
— Pietro Maximoff, Avengers: Age of Ultron
Advertisement:

This is where a person carries a photo of a loved one who isn't with them around them at all times. This loved one can be somebody who is dead, far away for an extended period of time or the carrier may just be a Stalker with a Crush. If the person is dead, then this symbolizes the attachment that the carrier still has. If they're far away, then this shows that the carrier is anticipating their return. If the carrier is a stalker then there are thousands more where that came from. It may also be an Orphan's Plot Trinket, usually when kept in a locket. Even still, if the photo is ruined, there are two possible outcomes:

If the person in the photo is dead and the story is set in Japanese culture, the photo will be all the more important as a channel for the deceased person's spirit to stay in touch with those still living.

Not to be confused with Fatal Family Photo, though it can overlap. If the Precious Photo tells us something about the character's family, then it's a Family Portrait of Characterization.