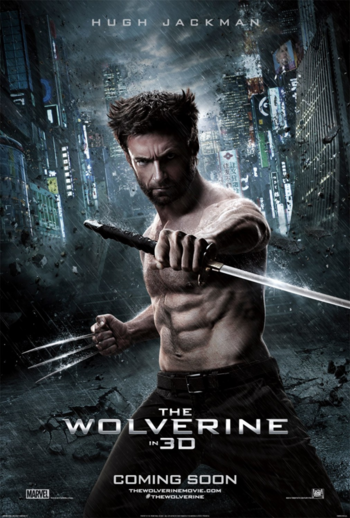 Wolverine goes samurai! note By the way, in the movie, he's instructed to wield the sword with both hands.
Yashida: Eternity can be a curse. It hasn't been easy for you, living without time. The losses you have had to suffer. A man can run out of things to live for. Lose his purpose. Become a ronin. A samurai without a master. I can end your eternity. Make you mortal.
Logan: What they did to me, what I am, can't be undone.
Advertisement:

The Wolverine is a 2013 superhero film based on the character of Wolverine.

Directed by James Mangold, the film is loosely based on Chris Claremont and Frank Miller's acclaimed 1982 Wolverine mini-series, which saw the character traveling to Japan. It is the second attempt to give Wolverine his own movie following X-Men Origins: Wolverine to which this was originally going to be a sequel. Hugh Jackman reprises his role as Wolverine from the X-Men Film Series, and is joined by Tao Okamoto as Mariko Yashida, Will Yun Lee as Kenuichio Harada, Hiroyuki Sanada as Shingen Yashida, and Rila Fukushima as Yukio.

Set some years after the events of X-Men: The Last Stand, the movie follows Logan, after he left the X-Men as he travels to Japan to bid farewell to an old friend on his deathbed. While there, he is caught up in a world of Yakuza intrigue and falls for their latest target Mariko, the daughter of a powerful industrialist.

, and the second international trailer here

. The storyline that inspired this film was also loosely adapted into a Wolverine anime series in 2011. A final stand-alone Wolverine film, titled Logan, was released in 2017.

Followed by X-Men: Days of Future Past, which is also a sequel to X-Men: First Class and the original trilogy.

Tropes applying to The Wolverine:

open/close all folders
Tropes A to C
Advertisement:
Tropes D to G
Tropes H to J
Tropes K to M
Tropes N to P
Tropes R to T
Tropes U to Z
"There are dark forces, Wolverine. Evil forces, building a weapon that could bring about the end of our kind."
Feedback