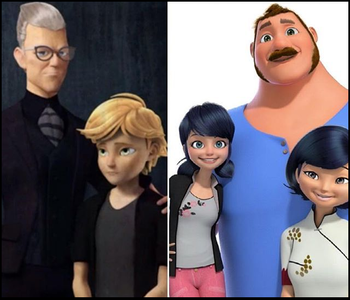 Can you guess which family is unhappy and distant, and which one is close-knit and loving?
Advertisement:

There are several aspects characteristics of the portrait that can be used.

This trope goes beyond plain family photos; it can also cover individual photos put up on the walls of a home (for example, a disliked or disowned family member might not have any photos of them displayed, or the favorite child gets much more exposure than the others). It can also cover other ways of displaying the family heritage, such as a family tree or portraits of ancestors that line the hallways. What's important is how the family heritage is displayed and what the audience can infer about the characters from it.

Compare the Fatal Family Photo, which is a happy photograph that characterizes someone as a loving spouse, parent, or partner...before they're killed off. Such a family portrait may also be a Precious Photo. Compare also Former Friends Photo and Happier Home Movie. Compare Funny Photo Phrase for another photography gag trope.