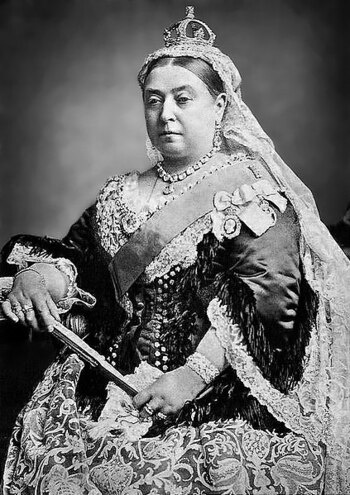 "We are not interested in the possibilities of defeat; they do not exist."
Captain Darling: I'm as British as Queen Victoria!
Captain Blackadder: So your father's Germannote it was actually her mother who was German, though being from The House of Hanover her father was of German ancestry as well, you're half-German, and you married a German?
— Blackadder Goes Forth
Advertisement:

Queen Victoria (Alexandrina Victoria, 24 May 1819 – 22 January 1901) reigned over the largest empire the world has ever seen. She was a hugely important figure, causing sweeping changes in the history of many parts of the world, and inspiring her people. She was not simply a prudish old woman with no sense of humour, and in fact probably never said, "We are not amused".note That Other Wiki even has a photo on her article they note as "Victoria amused", which explains that she likely never said it.

Her reign was equally momentous, occupying nearly the entire period of the Industrial Revolution, from 1837 to 1901, and being the longest in British history until 9 September 2015, when her great-great-granddaughter Elizabeth II surpassed her.

She married her handsome first cousin Prince Albert of Saxe-Coburg and Gotha, a small principality in what is now Thuringia, Germany, in 1840 and then never stopped breedingfun fact After having her first child, the queen noted the opinion that newborn babies were ugly, and also disliked breast-feeding. She went on to have eight more; all nine children made it to adulthood. until Albert died of typhoid fever in 1861, only 42, leaving Victoria stricken with grief. She never remarried, and indeed she spent the rest of her reign wearing only mourning colours and only rarely making public appearances and even more rarely living at Buckingham Palace;note Allegedly, she kept Empty Bedroom Grieving going for the remainder of her life — forty years. this earned her the not-entirely-complimentary nickname "the Widow of Windsor." As a result, republican sentiment in Britain was at its height, to the extent that some felt the monarchy was going to be abolished sooner or later; fortunately (for the monarchy at any rate), the Prince of Wales, and future Edward VII, "Bertie" had a better understanding of public relations and charmed the socks off the whole country, and partied the socks off the whole upper crust.note He also shagged the socks off... anyone female and willing, basically, but the former two seem to have cancelled this latter one out.

Victoria wanted every male British monarch after her to have a double-barrelled regnal name of "Albert [Something]", starting with her son, whom she expected would be known as "Albert Edward". However, "Bertie" decided that he would better honour his father's name if he left it to stand alone, and took the name "Edward VII". Now there is an opposite tradition: Any monarch with the given name "Albert" would not use that name, out of respect for the Prince Consort's singular position—as shown by George VI, whose given name was Albert and who was known publicly as Prince Albert, Duke of York, and privately as Bertie, until he took the throne (at which point his family still called him "Bertie"). However, there is a low-key tradition where each monarch/heir apparent who has a second son gives that son "Albert" as one of his names (if not necessarily his primary given name). note To wit: George V's second son was the aforementioned George VI, full Christian name Albert Frederick Arthur George; Elizabeth II's second son is Andrew Albert Christian Edward (Prince Andrew); and Prince Charles's second son is Henry Charles Albert David (Prince Harry). Prince William, however, bucked the tradition by naming his second son Louis Arthur Charles. However, Prince William being young and apparently quite fertile, he may yet give the name to a later son if he has one.

Though she never stopped mourning for Prince Albert, she did to some extent move on eventually. Though her children and the upper class of Britain largely wished she hadn't, because her close friendship (widely speculated to also be romantic) with her Scottish servant John Brown was widely seen as scandalous. Not only was he a commoner, he was seen as almost a barbarian for his complete lack of concern for their difference in social class. Victoria on the other hand seemed to find this refreshing. There were even rumors that she secretly married him, though most historians discount this.note Some conclude that if Victoria had remarried, even to someone so "inappropriate", she would've been headstrong enough not keep it secret. When Brown died in 1883 (at only 56), Victoria proceeded to scandalize the upper class again because her new favorite servant was Mohammed Abdul Karim, an Indian Muslim who taught Victoria the Hindustani languagenote today known as Hindi-Urdu after she was given the rank Empress of India and wished to be able to speak with her new subjects. While there was absolutely no hint of romance by Karim, the simple fact that he was not white and not Christian, as well as genuinely taking advantage of his position and Victoria's age, meant that he was seen as an even more inappropriate friend for the Queen.

She had a famously good working relationship with Prime Minister Benjamin Disraeli (who arranged for her to become Empress of India), and to a lesser extent with his eventual successor as Conservative Party leader, the Marquess of Salisbury. By contrast, she had a famously bad working relationship with Disraeli's (and later Salisbury's) Liberal Party rival William Gladstone, in part because of his manner (she famously complained of him that he spoke to her "as if [she] were a public meeting"), and also because of his support for Irish home rule. The end result was that when Gladstone retired in 1894, she disregarded his advice to appoint Lord Spencernote Incidentally, Diana's half-great-great-uncle as his successor and instead appointed The Earl of Rosebery, Gladstone's unpopular foreign secretary, in what many felt was a transparent ploy to help Salisbury return to power. This naturally inflamed those who considered it unacceptable political interference on her part, but if so then it had the desired result — Rosebery's government lasted barely a year, and Salisbury returned as PM following a Landslide Election, with him remaining in the office for the rest of her life (he stood down the year after her death). To put the icing on the cake, she denied Gladstone the earldom traditionally given to retired PMs who did not already have peerages. (As a result, it's pure bad luck that Gladstone didn't get an earldom; the future Edward VII liked and respected Gladstone as much as his mother had hated him, and if Gladstone had lived long enough to see the Prince of Wales become King, it's likely he would have become Earl of Somewhere shortly after the new monarch's accession.)

Victoria was the first monarch to be photographed (the earliest known photo of her dates to c. 1845), and the first to be recorded, though no verifiable audio of her is known to have survived. A popular (and nearly indecipherable) clip circulating the internet which is claimed to be of her speaking in 1888 hasn't actually been proven to be her speaking.

The hemophilia which plagued the royal houses of Europe in the late 19th and early 20th centuries was likely the result of a spontaneous mutation in her genomenote such mutations are more common in the offspring of older men, and her father was 50 when she was conceived, and most of her descendants marrying into them (a tendency which earned her the nickname "Grandmother of Europe" — during World War I the King-Emperor of Britain, the German Emperor, the Tsarina of Russia, the Queens of Norway, Spain, Greece, and Romania, and the Crown Princess of Sweden were all her grandchildren). It even came to be known as "the royal disease" because of this, and played a part in discouraging interbreeding among royals, which had by that point been common in Europe for several hundred years. (Most of said royals losing their throne in the 20th century played a part as well.) Two of her daughters were confirmed carriers, and one of her sons suffered the diseasenote she had four and a 50% chance of passing it on, so only one of them getting it was actually a stroke of luck, and the heirs to both the Spanish and, more infamously, the Russian throne were sufferers as well. This would have major implications.

Many, many books have been written about her and the era named after her. These tend to be set when they were written, either in Victorian London or in the colonies. Also the default timeframe for Steampunk works.

The Queen has been seen in the following works: