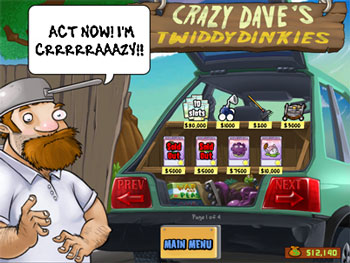 "HE'S CRRRRRAAAZY!!"
"Come on down to Crazy Al's! Where you'll find our prices average, but I'm F*** ing NUTS! You'll come for the free refreshments, but you'll stay or I'll CUT YA'!"
— Unknown stand-up comic, Just for Laughs
Advertisement:

A weird mutant kind of ad that tends to turn up in lesser time slots, wherein the proprietor of a discount retail outlet yells about how he's gone completely mad, and that his insanity is manifesting itself as his selling his wares at prices so unprofitably low that only a lunatic would set them. No doubt because of the owner's deranged price-slashing, many of these stores seem to be perpetually on the verge of going out of business, holding innumerable closing down sales where "everything must go!!!". They also often refer to the owner's mental state right in the name of the store, e.g. Crazy Larry's Carpet Emporium.

In a variant, the "boss" is out of town and the underlings are the ones indulging in this madness — but buy quick before he realizes what's going on and comes back!

Arguably originated by the Crazy Eddie

consumer electronics chain that existed in the Northeastern United States from 1971 to 1989. It was famous for the fast-talking, near-frothing announcer Jerry Carroll (contrary to popular belief, not Crazy Eddie himself) who, clad in turtleneck and sports jacket, would stick his face into the camera and spread his arms wide to give the company's trademark slogan, "Hey-heh-heh-heh hey, it's Ca-raaazy Eddie! His prices are IN-SA-A-A-A-A-ANE!" Of course ol' Eddie himself might have been inspired by Madman Muntz.

A relatively well-known variant of the Put a Face on the Company principle. Often seen in the kind of Kitschy Local Commercial that Honest John's Dealership uses. May be the explanation why We Buy Anything and We Sell Everything.

One of the companies you can play adverts for is Neil's Deals Limited, starring Crazy Neil. Living up to his name, Neil is crazy to let viewers know about their low prices.

One of the companies you can play adverts for is Neil's Deals Limited, starring Crazy Neil. Living up to his name, Neil is crazy to let viewers know about their low prices.