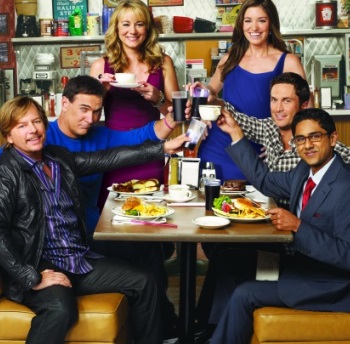 Rules of Engagement is a Dom Com that debuted on CBS on February 5, 2007 and ended on May 20, 2013. It premiered as a midseason replacement, immediately following Two and a Half Men, in the time slot that was occupied by The New Adventures of Old Christine (9:30-10 p.m.). The series is produced by Adam Sandler's Happy Madison Productions and is distributed by Sony Pictures Television.

Two couples and their single friend deal with the complications of dating, commitment and marriage. It looks at different relationships in various stages, starring Oliver Hudson (Adam Rhodes) and Bianca Kajlich (Jennifer Morgan) as newly engaged sweethearts, Patrick Warburton (Jeff Bingham) and Megyn Price (Audrey Bingham) as a long-married couple and David Spade (Russell Dunbar) as their still-single friend. A sixth character, Timmy, who is Russell's assistant at work, was introduced in Season 3, played by Adhir Kalyan.

The show featured writers from the Emmy Award-winning Everybody Loves Raymond. Not to be confused with a 2000 film of the same name starring Tommy Lee Jones and Samuel L. Jackson.