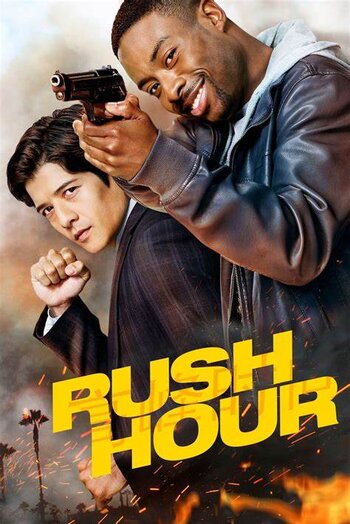 Rush Hour is a 2016 Buddy Cop Show drama series created and produced by CBS. Based on the Rush Hour movie trilogy developed by Blake McCormick and Bill Lawrence, it stars Justin Hires and John Foo as Detectives James Carter and John Lee with Aimee Garcia, Wendie Malick and Jessika Van in supporting roles.

The Hong Kong Police Force conducts an anti-smuggling operation against the Quantou triad, resulting in securing several terracota statues as the largest bust in the force's history. Detective John Lee is called in to head to the United States after a supposed transfer between the HKPF and the Los Angeles Police Departments goes wrong with several HKPF officers killed by Quantou triad 49ers under disguise as LAPD officers. The LAPD has Detective Carter assigned to help Lee investigate the case. They later find out that the Quantou had some inside help—which all starts when Lee sees his supposedly dead sister, still alive and helping them.

And that's not the only case the two detectives need to solve in Los Angeles. Lee transfers to the LAPD and becomes Carter's full-time partner, using his time to find out what happened to his sister.

CBS announced that the show will not be renewed after it finishes airing all the episodes.

Go here for the Rush Hour characters page for those who appear in the TV adaptation. (Work in Progress)