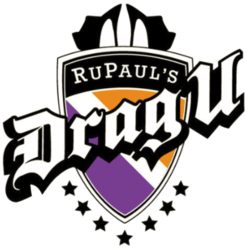 RuPaul's Drag U is a Reality Show and Spinoff of RuPaul's Drag Race, in which three cis women are brought onto the show to be given makeovers ... into Drag Queens. In each episode, the women are given their own personal "Drag Professor", who is a former contestant from Drag Race, and throughout their transformation are given simple make-up and beauty tips that they can take into their everyday lives, and given a boost their confidence that regardless of how they look, they are beautiful, inside and out.

At the end of every episode the women compete in a short runway in which they show off their new Drag Queen personas, are asked a few questions to gauge their improved outlooks, and then perform in a lip-synch performance, and are graded on their D.P.A. (which stands for "Drag Transformation", "Performance", and "Attitude"). The woman who shows the most improvement wins the title of Valedictorian and a cash prize.

Although RuPaul is the host and dean of Drag U, he does not actually take part in the judging (nor does he even dress in drag during the show). Instead, he defers to his good friend, Drag Queen Lady Bunny who is the "Dean of Drag", as well as a "Dean of Dance" (who during the first season was Frank Gatson, Jr., but after that was a different choreographer weekly), and a celebrity guest judge.