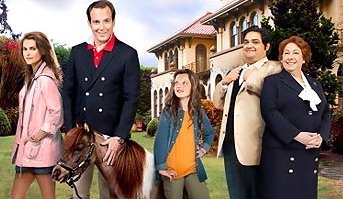 Emmy: I'm going to make you a better man.
Steve: Not if I make you a worse woman first.
Advertisement:

A show by the creator of Arrested Development.

Steve Wilde is the filthy rich son of an oil magnate. He's giving himself an award for being the "Humanitarium of the Fiscal Year" and invites Emmy Kadubic, his crush when he was younger.

Emmy and her daughter Puddle live in the Amazon rainforest and are trying to preserve tribal land from being destroyed by WildeOil. Deciding that maybe Steve can help with this, she goes to Steve's party. Seeing that Steve hasn't changed, however, she decides to take off back to the rainforest.

Puddle, however, has other plans. She hates the rainforest and wishes to stay and be normal. With the help of Steve and Steve's equally rich neighbor Fa'ad, she finally gets her mother to stay, with Emmy convinced that she can change Steve's selfish ways.

Canceled after one season.