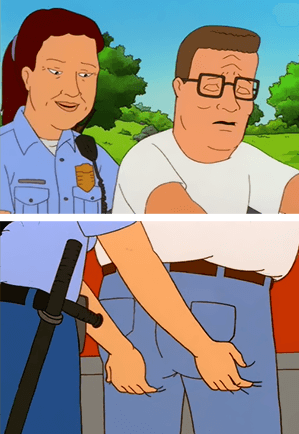 "Oh, say, can you seeee"
"I'll let you have thirty more seconds. But you're enjoying this too much. When I think you've had enough fun to realize I don't have a weapon, I'm going to step back, and you'll take your hands away. If you don't, I'll break your neck."
— Catherine Ling, What Doesn't Kill You
Advertisement:

When a character uses a pat-down as an opportunity to grope another character. Often times done by a Dirty Cop or a Mook who has a character, usually female, in a position where it seems unlikely they would fight back, usually because they're tied up or in the case of a Dirty Cop doing the pat-down, the character is likely to get in more trouble for assaulting a cop.

Related to I Have You Now, My Pretty and Creepy Physical. See also Victoria's Secret Compartment.