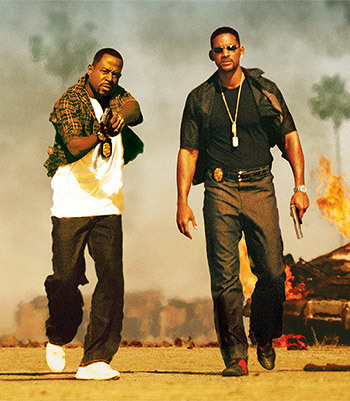 "Every police force in the US always contains two officers who are direct polar opposites, but are forced to work together, before eventually getting on quite well."
— "Hollywood Rule Book,"

Buddy cop shows often give a good deal of focus to the emotional lives and relationship of the two Main Characters. Because of this, two tropes that this genre is strongly associated with are The Not-Love Interest (where the plot focuses on the initial development of their relationship, typical of movies), and Heterosexual Life-Partners or Platonic Life-Partners (where the plot focuses on a pre-existing relationship, typical of TV series and movie sequels). The buddies are often an Odd Couple, occasionally one black and one white. In terms of personality, they tend to follow a distinct formula-one is a straight-laced stickler for protocol, the other is an unpredictable loose cannon. One By-the-Book Cop, one Cowboy Cop. You get it. The primary thing keeping them together — before Character Development — is that together, they fight crime. And they do it very, very well.

Movie versions abound, or at least they used to: Bad Boys (1995), Lethal Weapon, Die Hard with a Vengeance, etc. It was so common at one point that even making jokes at the expense of the genre became cliche.

Increasingly common variants are partnerships between a cop and a scientist, a cop and a Boxed Crook, a female cop and a snarky guy, or Androids and Detectives.