Series / The Streets of San Francisco 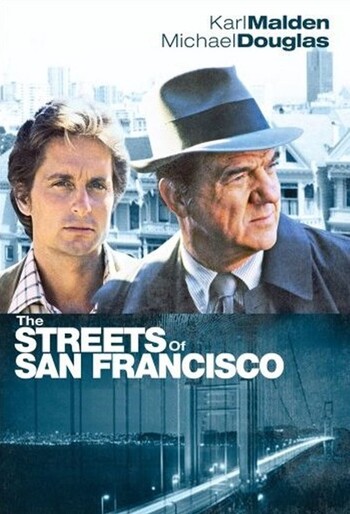 A crime drama series that ran on ABC from 1972–77, produced by Quinn Martin Productions (with Warner Bros. Television in Season One) and shot on location in San Francisco.

The series starred Karl Malden as Det. Lt. Mike Stone, a veteran homicide cop, with Michael Douglas (in his Star-Making Role) as Det. Insp. Steve Keller, Stone's younger partner. Douglas left the show at the start of its fifth and final season, and was replaced by Richard Hatch as Det. Insp. Dan Robbins; this change was not popular with viewers (since Battlestar Galactica hadn't been created yet), leading to declining ratings and the show's cancellation.

Unique among crime shows since, the show's actors and writers took great pains to ensure an authentic portrayal of the San Francisco Police Department.