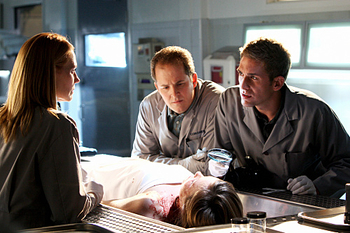 Dead men tell all sorts of tales.
"I'm telling you, DeGroot, keep Crime Scene Unit out until you're done and not before. They've all seen CSI and suddenly they're all Sherlock Holmes now. Magic words for dealing with CSU: 'shut up and lift the fucking fingerprint, lab monkey'."
— Frank Ironwine, Ironwine
Advertisement:

Police detectives, private detectives, amateur detectives, beat police, retired police, lawyers, reporters and judges... almost every major career that could have something to do with crime has been used at one point or another as inspiration for a Police Procedural, so it was inevitable that TV would eventually turn to the lesser-known elements of police investigation for material.

As a result, we get the Forensic Drama. Most commonly this genre follows forensic pathologists — they're the ones that cut up the corpses — but will also include shows or characters that specialise in general forensic science (lifting fingerprints and the like), forensic psychology and forensic toxicology among a dozen other specialisations. Basically, if you can put "forensic" on the front of it, there's probably a pilot episode in existence somewhere.

As dull as this may seem, viewers do actually turn on in droves to see the adventures of a bunch of people who mostly spend their time sitting in laboratories or offices rather than chasing armed criminals. Some series get around this by having the investigator get caught up in the murderer's private life, or by bending the rules a bit to allow him or her to interview and arrest suspects. In real life, though, they're mostly just The Lab Rat.