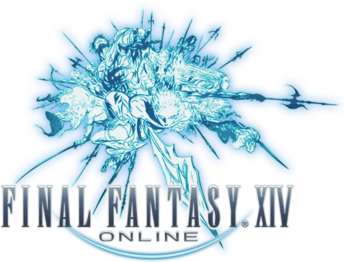 "War born of strife, these trials persuade us not. (Feel what? Learn what?)
Words without sound, these lies betray our thoughts.
Mired by a plague of doubt, the Land, she mourns. (See what? Hear what?)
Judgement binds all we hold to a memory of scorn.
Tell us why, given Life, we are meant to die, helpless in our cries?"
— Lyrics from "Answers"
Advertisement:

Final Fantasy XIV is the fourteenth game in the groin-grabbingly popular Final Fantasy series. It is an MMORPG, similar to its online predecessor Final Fantasy XI, and was timed exclusively to the PC in its first release, and was a simultaneous PC & PS3 release in its second iteration (see below). In both its 2010 and 2013 releases, it had both a Standard and a Collector's Edition, whose buyers were able to start the game 8 days early (in the 1.0 CE's case), get exclusive in-game items, a themed journal (in 1.0) or an artbook (2.0), and some other bells and whistles.

The game is set in the Eorzea region of the planet Hydaelyn. Before the start of the game, the dungeonpunk Garlean Empire had set to use their overwhelming military force to attempt to conquer Eorzea, starting with the city-state of Ala Mhigo. The remaining four city-states—Limsa Lominsa, Ul'dah, Gridania, and Ishgard—militarized to meet this threat, but before another shot was fired the Garleans were halted in their tracks by the sudden intervention of a horde of dragons. this left the city-states with a large armed force but nothing to really fight against, and the Garleans fortifying their current position but not advancing any farther. The cities thus banded together in an uneasy peace, forming the Adventurers' Guild to employ these new mercenaries and investigate the secrets behind the Empire's sudden invasion and retreat.

The game was initially met with mixed-to-bad reactions from players and reviewers alike, citing numerous glitches and bugs, poorly implemented features and an unbalanced in-game economy as the game's main problems. Square Enix responded by apologizing for the state of the game

, and replaced several key members of the development team. The team then had to decide if they wished to try to fix and salvage what they could or rebuild the game from almost the ground up. They ultimately opted for the latter.

The new version, called Final Fantasy XIV: A Realm Reborn, brought about sweeping changes by rebuilding the world and engine from the ground up. Set five years after the climax of the original game, the world has entered the "Seventh Umbral Era": a period of decline brought about by the fall of the lesser moon Dalamud and the ensuing rampage of the ancient Primal Bahamut. The people of Eorzea have survived thanks to the "Warriors of Light", but for some reason no one can remember exactly how they were saved or who the Warriors even are. With the aid of the three Grand Companies and the enigmatic "Scions of the Seventh Dawn", a new generation of adventurers must rise to take on this brave new world, fighting not only the rallying beastman hordes and the looming Garlean Empire, but a dark sect of masked sorcerers whose origins may be deeply rooted in Hydaelyn's history.

A PlayStation 3 version, originally scheduled for a March 2011 release and initially put on indefinite hold, was finally released alongside the Realm Reborn client in August 2013. An Xbox 360 version was also in development, but has been canceled after they failed to come to an agreement with Xbox Live and Microsoft. The PlayStation 4 version was announced in E3 2013 and was released in April 2014. A smartphone app called Libra Eorzea was also released as a reference for quests and such, though it has since been rendered defunct and replaced by the FFXIV Companion App. Talks are still ongoing with Microsoft and there is potential for an Xbox One version.note Though it appears contingent on two things: one, the Xbox version absolutely must be allowed to talk to the same servers as the PC and PS3 & 4 versions, which Microsoft was opposed to at the time; and two, the game should ideally not require an Xbox Live Gold subscription to access online functions, since it's already a subscription-based game and the additional fee would be unfair for Xbox players who otherwise don't use the Gold services for much. Microsoft has reversed their stance on cross-platform play, ironically leaving that requirement in Sony's hands. It is unclear if they will budge on the Xbox Live requirement, however. It has also been recently hinted that Square Enix would like to publish the game on Nintendo Switch, but Sony's current refusal to allow for cross-platform play likely makes this difficult. In February 2021, an open beta for a PlayStation 5 version was announced to launch on April 13, 2021.

The hype for A Realm Reborn was severely underestimated by Square Enix, who were forced to pull the digital copy of the game after their servers choked from the sheer influx of new players attempting to log in. After improving the capacity of their servers, they began to ease back the restrictions and gave everyone one week of free play as way of apology. Even to this day, many servers remain character-creation-locked during their "prime-time" hours, in an attempt to keep server populations relatively even, due to the sheer number of new people still joining the game.

In April of 2017, Square Enix aired Final Fantasy XIV: Dad of Light on Japanese television. The series covers the exploits of a young man who aims to reconnect with his estranged father through Final Fantasy XIV. The series was made available for international audiences via Netflix in September of 2017.

Archives of cutscenes from the first version of the game (1.x) exist on YouTube (such as this one

), and much of the text is preserved on various wikis; none of it may be found any longer in game. An excellent video with a condensed summary of 1.0's lore may be found here

Yet stand tall, my friend
Our journey will never end
Feedback

A showcase of the abilities and actions for Final Fantasy XIV's Black Mage job as of the game's "Endwalker" expansion.

A showcase of the abilities and actions for Final Fantasy XIV's Black Mage job as of the game's "Endwalker" expansion.