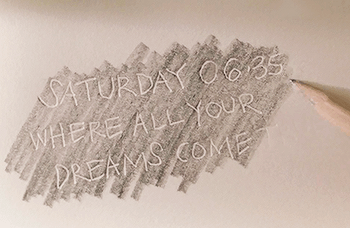 It is a pity he did not write it in pencil: as you have no doubt frequently observed, Watson, the impression usually goes through — a fact which has dissolved many a happy marriage.
— The Adventure of the Missing Three-Quarter
Advertisement:

When people write a letter or a note, it's possible that the pressure of their pen or pencil will create indentations not just on the paper they're writing on, but on any paper that's underneath it, too. In some sorts of story (particularly Mystery Fiction, though not exclusively), making use of this fact is a well-established investigative technique. If you want to know what someone wrote on a notepad but the note is no longer there, just look at the next piece, possibly shading it with a pencil to bring out the contrast.

In certain genres and at certain times, this trope has been common enough that a savvy villain might take steps to avoid it, such as by taking several sheets from a notepad or slipping a piece of cardboard between the top two sheets, to prevent the pesky detective from doing this.

A number of variations on this exist — for example, it isn't always paper that the indentation gets made on. A similar concept from the time when writing involved a lot of wet ink was to look at the blotting paper

(used to absorb excess ink). Carbon-copy and triplicate-copy paper are designed to take advantage of this, allowing the impression to release ink so that multiple copies are written or typed at once.

Subtrope of Invisible Writing, and sister trope to Condensation Clue.