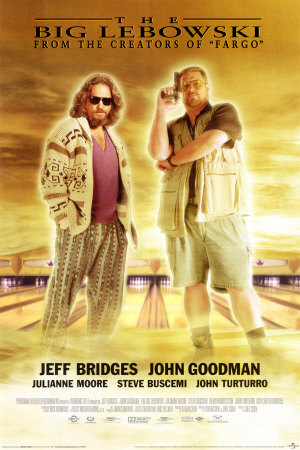 Cult Classic directed by The Coen Brothers in 1998. It's a bit hard to describe, but let's call it a Film Noir parody.

Jeff Bridges stars as a lazy and useless slacker named Jeffrey Lebowski, who prefers to be known as "The Dude". One night, a pair of thugs break into his house, dunk him in the toilet, and pee on his rug, mistaking him for a local millionaire, also named Jeffrey Lebowski (David Huddleston, the eponymous "Big" Lebowski). Said millionaire, who denies compensation for said rug, ends up recruiting the Dude to help in the negotiations for his kidnapped wife, Bunny (Tara Reid), and that's when the plot takes off.

This being a Coen Brothers movie, though, the plot isn't what's important. The driving force of the movie is the bunch of various bizarre characters, almost all of whom seem to come from different movies. For more information about them, see here.

Despite being a disappointment at the box office and initially getting a mixed reception from critics, The Big Lebowski has become one of the biggest cult classics in modern film history, to the point that it has a yearly festival dedicated to it, both in America and England. Critics nowadays also look upon it far more kindly as a modern comedy classic.

A spinoff/sequel centering on Jesus Quintana, a.k.a. "The Jesus", is scheduled for 2020, currently titled The Jesus Rolls. John Turturro is set to reprise the role, and the film is also said to be based on 1970s French film Les Valseuses.

Well, sir, it's these tropes I had. It really tied the page together:

The Dude and Jesus Quintana square off, leading to an all-time comeback. Contains strong language.

The Dude and Jesus Quintana square off, leading to an all-time comeback. Contains strong language.