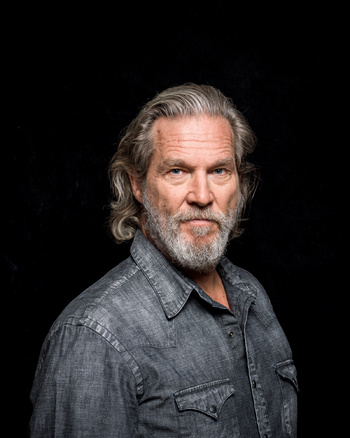 "I'm the Dude. So that's what you call me. That, or His Dudeness … Duder … or El Duderino, if, you know, you're not into the whole brevity thing."
"Yeah, well, you know, that's just, like, your opinion, man."
— as The Dude in The Big Lebowski
Advertisement:

Jeffrey Leon Bridges (born December 4, 1949 in Los Angeles, California) is an American actor. His father, Lloyd, and brother, Beau, have also been actors. Consequently, he has been acting for over forty years, and has won or been nominated for several awards, including a Best Actor Academy Award for Crazy Heart (2009). He's also found some success as a Singer-Songwriter, most notably with a 2011 Self-Titled Album that made the pop, rock, folk, and country charts.

He married Susan Geston in 1977 and they have three daughters and one grandchild. Jeff Bridges lives in California, and meditates every day.