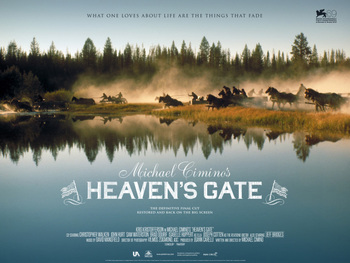 "It's getting dangerous to be poor in this country."
— John L. Bridges
Advertisement:

Very Loosely Based on a True Story, the film takes place in 1890s Wyoming during the Johnson County War

, and tells the tale of two men, Sheriff James Averill (Kris Kristofferson) and gunslinger Nathan Champion (Christopher Walken). Averill's lawful duty is to keep the peace between poor immigrants and rich farmers, while Champion is the farmers' means of lethal property protection. (The immigrants have been stealing cattle, but only to stave off hunger.) Both are in love with the same woman: Ella Watson (Isabelle Huppert), a madam who falls on the farmers' "hit list". As a result, they end up opposing the farmers and join the immigrants' side in the subsequent Johnson County War. Let's just say this battle is a long one.

Savaged by critics on its release, the film became a Box Office Bomb—earning $3.4 million on a $44 million budget (losing more money than The Deer Hunter gained)—and an infamous Creator Killer. Michael Cimino, who had been one of Hollywood's hottest young directors following his Academy Award-winning The Deer Hunter, never recovered. He worked sporadically after this film (even serving as the director of Footloose before his constant requests to make it more extravagant—and expensive—led him to him being fired and replaced due to fear of another Heaven's Gate), but never enjoyed the success he had prior to it. Kris Kristofferson, who had enjoyed a very successful career as a leading man in The '70s, never headlined a film this big again. The film had gone way, way over budget, causing Transamerica to sell United Artists to MGM, thus ending that studio's sixty-year run as a distribution company for independent producers.note Steven Bach, the UA production exec who greenlighted Heaven's Gate, had his career ruined too, as he was fired after the movie bombed. He wrote a famous book about the disaster, Final Cut. It is also regarded as a milestone signalling the end of the New Hollywood era, the period in the late 1960s and '70s in which auteur directors enjoyed unprecedented creative freedom and control over their work; this environment would quickly fade out over the next three years as studios reasserted control and The Blockbuster Age of Hollywood rose to prominence.

However, in spite of the critical and commercial backlash, the film was saved by independent film channel Z Channel, which was run by a friend of Cimino and who convinced Cimino to restore the original version of the film with an eye towards the cable and home video market. Upon its re-release (and sparked by the notoriety of the film), the director's cut of Heaven's Gate has seen its reputation rebuilt somewhat among film critics outside of the controversy of its genesis, with its acclaim only rising further with the release of a new director's cut by The Criterion Collection in 2012.

In addition to Kristofferson, Walken, and Huppert, the All-Star Cast includes John Hurt as Billy Irvine, Sam Waterston as Frank Canton, Brad Dourif as Eggleston, Joseph Cotten (in one of his last film roles) as the Reverend Doctor, Jeff Bridges as John L. Bridges, Terry O'Quinn as Captain Minardi, Mickey Rourke as Nick Ray, and Willem Dafoe (in his film debut) as Willy.

Not to be confused with the infamous UFO-based cult of the same name, or with Gates of Heaven.