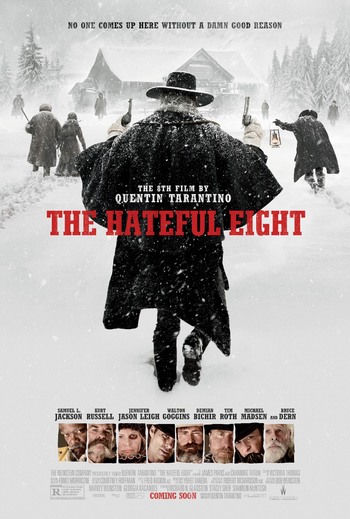 "Move a little strange, you're gonna get a bullet. Not a warning, not a question, a bullet."
— Major Marquis Warren
Advertisement:

The Hateful Eight is a 2015 Western and the eighth film written and directed by Quentin Tarantino.

Six or eight or twelve years after The American Civil War, a stagecoach hurtles through the wintry Wyoming landscape towards the town of Red Rock. Its passengers are Bounty Hunter John "The Hangman" Ruth (Kurt Russell) and his captured quarry Daisy Domergue (Jennifer Jason Leigh), who he is transporting to Red Rock to face justice (and the gallows). Along the way, the stagecoach picks up two strangers who happened to be on the road: Major Marquis Warren (Samuel L. Jackson), a black ex-Union soldier turned infamous bounty hunter, and Chris Mannix (Walton Goggins), a Southern renegade who claims to be Red Rock's newly-appointed Sheriff.

Losing their way in an oncoming blizzard, the stagecoach is forced to take refuge at Minnie's Haberdashery, a stagecoach stopover on a mountain pass. When they arrive, they are greeted by four unfamiliar faces: Bob (Demián Bichir), who is taking care of Minnie's while she is away visiting her mother; Oswaldo Mobray (Tim Roth), the hangman of Red Rock; cow-puncher Joe Gage (Michael Madsen); and Confederate General Sandford Smithers (Bruce Dern).

Yet as the storm overtakes the mountainside cabin, locking them in for the night, tensions and suspicions begin to ignite and it soon becomes clear that the eight travellers may not all make it to Red Rock after all.

Notably features the first Western score by Ennio Morricone since 1981—especially unique as Tarantino is usually not one to "trust" composers to score original music for his films (although he doesn't mind taking music written for other movies). This was also the first film to be shot in the 2.76:1 aspect ratio Ultra Panavision 70 process since Khartoum in 1966. It was also presented in a "Roadshow" format in about 140 theaters worldwide with 70mm projection, extended runtime and a special programme.

Tarantino also plans to adapt the film into a stage play, which is actually how Harvey Weinstein thought the material would best be served in the first place.

When the film became available on Netflix in April 2019, an extended version in the form of a 4-episode Mini Series was unveiled on the streaming service alongside the theatrical cut, to the surprise of everyone.

Due to the nature of the film and the wiki's policy about trope titles, unmarked spoilers follow, and on related pages.