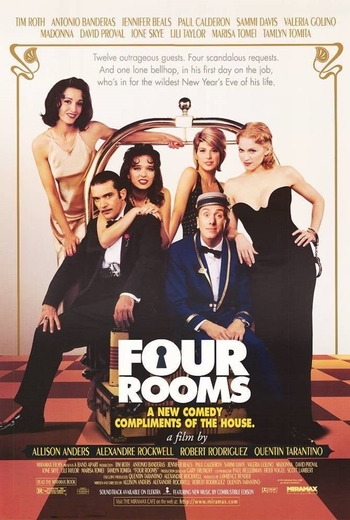 Four Rooms is a 1995 Black Comedy Round Robin Anthology film consisting of four segments, linked by a framing story: Ted (Tim Roth) is a young and rather loopy bellhop working at a once famous Los Angeles hotel that has fallen from grace and become a haven for criminals and creeps. On New Year's Eve, he ends up with an interesting set of clientèle as the only employee on staff. Hilarity Ensues.

A coven of witches gather for a ceremony to resurrect their petrified goddess. Four of them brought their ingredients, but the fifth failed to bring hers: semen. When Ted shows up, he happens to be the closest male available.

Written and directed by Allison Anders.

After some drunk people at an Ambiguously Gay disco party ask for ice and screw up their room number, Ted ends up entering the room of a man (David Proval) holding his Bound and Gagged wife (Jennifer Beals) at gunpoint. Mistaking him for someone else, he gets forced to partake in a particularly odd S&M game because the man has a "big fucking gun".

Written and directed by Alexandre Rockwell.

A Mexican gangster (Antonio Banderas) and his wife (Tamlyn Tomita) decide to leave their kids at the room for the night while they go to a party. Rather than call a babysitter, they pay Ted five hundred dollars to tend to them and make sure they don't misbehave. Finagle's Law immediately takes hold.

Written and directed by Robert Rodriguez.

Penthouse - The Man from Hollywood

After a brief phone call to his boss (Kathy Griffin) to be let off for the night, Ted ends up making one last stop. Chester Rush is a famous director (played by Quentin Tarantino) holding a private party with some of his buddies from the business. After seeing an old episode of Alfred Hitchcock Presents where a man bets his little finger he can start a lighter ten times in a row, they decide to replicate it, and they have decided that they want Ted to join the festivities...

Written and directed by Quentin Tarantino.