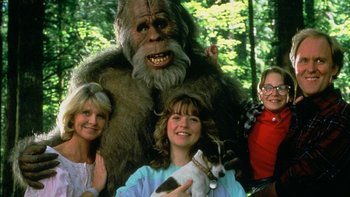 "Pokémon only do bad things because master bad."
— Ekans, Pokémon ("Island of the Giant Pokémon")
Advertisement:

Monsters are born of human fears. Ghoulies, ghosties, long-leggety beasties, and Things That Go "Bump" in the Night, and they all share a common factor — they threaten. Their claws are sharper, their muscles are stronger, their fangs tear faster... you can generally count on monsters to be capable of hurting things, usually you.

And then there are these guys. These monsters aren't after you. They don't want to hurt you. Mostly, they want nothing to do with you in the first place. They might even be kind to you if you encounter them.

Benevolent Monsters are fantastic creatures that are usually no more dangerous than Real Life flora and fauna. Many times, they will even be safer, despite any indication of powers or prowess to the contrary. Any threat they pose to the good guys is often due to Poor Communication Kills (it could be that the Monster Is a Mommy) and may even be a case of Let's You and Him Fight, with the monsters joining forces with the heroes to take on the villains. Settings with Benevolent Monsters are usually the best residence for the Zombie Advocate, though be on the watch for Van Helsing Hate Crimes.

Note that for Benevolent Monsters to be in effect, non-maliciousness must be the default state of all or most of the monsters, so that malice or villainy becomes the rare exception to the rule. This can also apply to certain species of monster within a work, rather than all the varied types (i.e. the vampires in Setting X are all evil, but the werewolves are all Benevolent Monsters).

Naturally, this is the super-trope of the following:

All of the above types of monsters are usually depicted as being evil and scary. Also closely related to the Reluctant Monster, which is a monster that may look frightening, but has no actual desire to harm people. Also see Dark Is Not Evil, where characters themed around dark or terrifying things are actually benevolent or at least not malicious, and Face of a Thug, which has the same general "looks scary but is actually nice" dynamic as this trope without necessarily being about monsters specifically. See also Domesticated Dinosaurs, where this trope applies to prehistoric animals. See the "Meta" section on this page for other related tropes.

Compare this trope with Humans Are the Real Monsters, which is this trope's blood brother; after all, if the monsters aren't evil, then somebody else probably is. Compare and contrast with the Non-Malicious Monster, which is a monster that really is very dangerous, but is not consciously evil or malevolent; it is simply acting out of animalistic instinct (i.e. killing and eating people just to survive). Lastly, there's Not Always Evil, which would be when the monsters in question have other interests besides being villains all the time.

Warning: Since this trope is often the end result of a reveal, expect spoilers.