You Need a Breath Mint 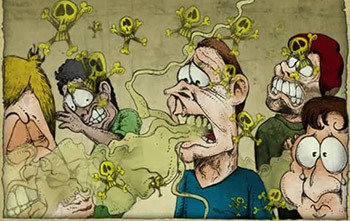 "Oh wow, that was REALLY scary. And if you don't mind me sayin', if that don't work, your breath will certainly get the job done, 'cause you definitely need some Tic Tacs or somethin', 'cause your breath STINKS!"
— Donkey, Shrek

Stock Phrase used when someone comments on another one's bad breath. Variants to the phrase can include brushing your teeth, or with mouthwash.