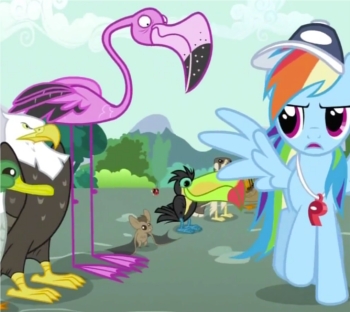 Rainbow Dash is awakened by her friends' pets from a crazy dream where she's attacked by a creepy chimera-like monster made up of... her friends' pets. The other ponies arrive soon afterward, and Applejack explains that they're at the park for their weekly Pony Pet Play Date. Feeling a bit left out, Rainbow Dash admits she might want to have a pet someday, whereupon Fluttershy enthusiastically drags Rainbow to her cottage, prattling on about the wonderful animals available. Once there, Fluttershy and Rainbow sing a jaunty tune about finding the perfect pet for Rainbow Dash, ending with her announcing a competition to do just that.

Before long, Dash is briefing her pet contenders on the upcoming challenge. When Fluttershy comes up and places a turtlenote Actually, it's a tortoise in the lineup, Rainbow Dash complains, but Fluttershy browbeats her into giving him a chance, as he's been trying to find a home for the longest time. Dash puts the pets through a series of events to test their speed, agility, guts, style, coolness, awesomeness, and radicalness. Despite finishing last every time, the tortoise persists in competing. At the end, Rainbow Dash commends his effort, but she's narrowed her choices down to an owl, a falcon, an eagle, and a bat.

The four fliers (and the tortoise) head for the tie-breaker, a race through the hazard-filled Ghastly Gorge, where the one who crosses the finish line with Rainbow Dash will be her pet. Dash leads them through a series of dangerous obstacles: a windy tunnel, a large patch of briars, and a nest of gigantic Quarray Eels. As the race continues, Dash flies backwards to offer taunts and encouragement — only to smack into a canyon wall, causing an avalanche that pulls her to the bottom.

When the dust clears, Rainbow Dash is trapped with one of her wings pinned under a boulder, while the four fliers pass by overhead, oblivious to her predicament. Her despondency turns to hope when an approaching shadow indicates help has arrived, only to return to despair when Dash sees it's the tortoise, plodding along. Ignoring her continued dismissals, he resiliently digs under the boulder and levers it up with his head.

At the finish line, the rest of the Mane Cast greet the fliers, but quickly become worried over Rainbow Dash's absence. Using a pair of binoculars, they spot the avalanche, then see the tortoise emerging from a cloud of dust, carrying Rainbow Dash on his back. Meeting Dash halfway, the ponies inform her that the falcon finished first, and they congratulate her on finding her new pet. Rainbow Dash ruefully admits the falcon is everything she thought she wanted in a pet... but then announces that the tortoise is the real winner, since he fulfilled her final rule by being there when she needed help and crossing the finish line with her. The upset falcon gracefully accepts defeat, and Rainbow Dash dubs the tortoise "Tank" for his toughness and tenacity, only for Fluttershy to point out that Dash wanted a pet that could fly and keep up with her...

The next week, as the ponies and their pets gather for the latest Pony Pet Play Date, Rainbow Dash proudly brings along Tank, who's now sporting aviator goggles and has a propeller pack strapped to his shell.

Today I learned what the most important quality really is; a certain kind of spirit; a sticktoitiveness. A never-give-up, can-do attitude that's the mark of a real winner!
Tenacity!