Recap / My Little Pony: Friendship Is Magic S1 E5 "Griffon the Brush Off" 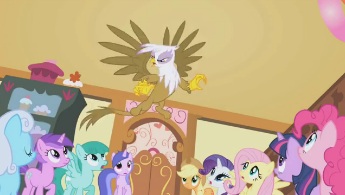 "This is your idea of a good time? I've never met a lamer bunch of dweebs in all my life!"
Pinkie Pie: Don't you worry your pretty little head about mean old Gilda! Your auntie Pinkie Pie has it all taken care of!
Fluttershy: [annoyed] I'm a year older than you.
Written by Cindy Morrow
Advertisement:

With some effort (and a lot of chasing), Pinkie Pie convinces Rainbow Dash to hang out with her, and the two bond playing some harmless pranks on their friends. While Spike, Twilight, Applejack, and Rarity are all fair game, Pinkie is reluctant to do anything to Fluttershy, knowing how sensitive the pony is. She turns a prank on Dash instead, who accepts it with good cheer.

The next day, Pinkie goes to meet up with Dash, only to find that Dash is hanging with an old friend of hers from Junior Speedsters Camp, a griffon named Gilda. Pinkie keeps trying to interject into whatever the two are doing, but Gilda keeps rudely brushing Pinkie off, insisting that Dash doesn't need to hang with any "lame-o" ponies now that she's here. Pinkie is dejected and angry, but when she talks to Twilight about it, Twilight misinterprets it as Pinkie being jealous that Dash is spending less time with her.

After seeing Gilda give the other citizens of Ponyville the same shabby treatment, however, Pinkie is certain Gilda really is a "meanie-pants". It's bad enough seeing Gilda playing a mean-spirited prank on Granny Smith, then stealing from an apple cart, but the last straw is when Pinkie sees Gilda roar at Fluttershy for bumping into her. The poor, meek pegasus runs off crying.

Pinkie Pie: She's a grump, and a thief, and a bully! The meanest kind of mean meanie-pants there is! I can take it, but nobody treats Fluttershy like that... no one! This calls for extreme measures... Pinkie Pie-style!

Later, Pinkie Pie throws a big party to officially welcome Gilda to Ponyville. Gilda tries to play it cool, especially since her friend Rainbow Dash is there, but after falling victim to a series of pranks she starts to lose her temper and becomes suspicious of Pinkie's intentions.

Advertisement:
Gilda: I'm watching you, like a hawk.
Pinkie Pie: Why? Can't you watch me like a griffon?

After one prank too many, Gilda finally flips out and snaps at the other ponies, especially Pinkie and her silly practical jokes... except it turns out Rainbow Dash was behind all the pranks (which were meant for any guest to stumble into, not Gilda specifically), and Pinkie says she threw the party to get Gilda to lighten up by being nice to her. Rainbow Dash calls Gilda out on bad-mouthing her other friends, but Gilda mocks Dash for being a "flip-flop" and walks out in a huff. Once Dash apologizes for Gilda's behavior, the mood quickly brightens up and all the ponies enjoy the party again.

Later, Celestia receives Twilight's friendship report on being a good friend in the face of bad friends... as well as a pot of disappearing ink.

Gilda: Don't you know how to take get lost for an answer? Dash doesn't need to hang with a dweeb like you now that I'm around. You're dorkin' up the skies, Stinkie Pie, so make like a bee and BUZZ OFF!!