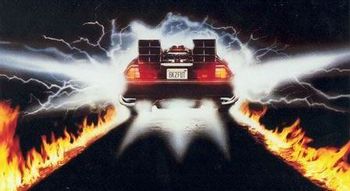 That's gotta be hard on the tires.
"I never ever had a love
Put the pedal to the metal and
Burn Rubber on me
On me."
— The Gap Band, "Burn Rubber"

In comics and cartoons, someone running or driving very quickly will leave a trail of fire in his or her wake.

Can be justified, albeit thinly, in the case of a wheeled vehicle (friction causes heat and tires are flammable — though in that case only the tires should be burning).note And even then, the turbulence from the tires spinning would put it out immediately. Can be Justified for aircraft tires, if the wheels are damaged severely enough to cause them to drag along the runway instead of spinning, but this isn't possible for anything that relies on its wheels to provide propulsion. Other times the trail of fire isn't caused by tires or indeed wheels, which may make you wonder what exactly is causing those flames. But honestly, when this trope is employed well, you won't worry about such niggling little details. It's cool.