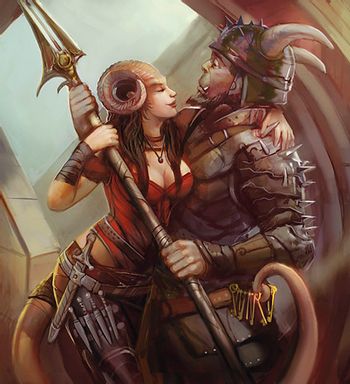 Where are you looking?
Advertisement:

Wouldn't life be just super if you had an extra hand? One that could be used to fetch your coffee or dial your phone? Or throttle the crap out of that yappy dog? Look no further than behind you, attached to your spine. If you are a bit of a pickpocket in the midst of those that keep watching where your hands are at, this might become extremely useful.

It's the world of fiction. In here you can be far less picky with species. Dogs? Sure. Cats? Why not. Lizard Folk? Certainly. Monkeys? Duh. Gorillas? ... well we said monkeys, already, didn't we?

Also a common feature on cartoon depictions of snakes or snake-like characters, who have no arms or hands otherwise.

Just to mention, "prehensile" means "adapted for seizing, grasping, or taking hold of something". As the page image so clearly demonstrates.