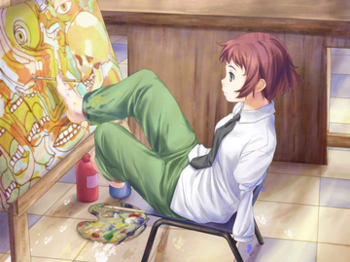 One of the hallmarks of being primates is that our limbs were adapted for life in the treetops. Both our front and hind limbs were modified to grasp branches. When the ancestors of modern human beings descended to the ground and started to walk upright, our front limbs remained as mobile as ever, but the back limbs were adapted for stability and aren't normally used for manipulation.

However, this character is capable of using their feet with the dexterity of a human hand. There are two flavors to it:

1) Character that have human-like feet, but they have developed enough skill and precision to use them as a pair of extra hands. The reason behind it varies from case to case; maybe their hands have been immobilized or can't be used in a particular situation, possibly they are trying to multi-task, or perhaps they're just trying to be outlandish and/or goofy. In the most extreme case, when the character doesn't have hands at all, a nimble pair of feet is the second best thing one can rely on to replace their function. Paradoxically, they don't need a lot of special equipment and are just as able-bodied as regular people despite missing two limbs.

2) Characters which have special lower appendages adapted to be used as hands. Characters based on non-human primates tend to display this trait, (as their feet are more or less an extra pair of hands) but there are many variations of it, including creatures with Bizarre Alien Biology, robots/cyborgs of various kinds, and humans with Bio-Augmentation. It's also not uncommon for them to exclusively use their "feet" to manipulate their environment because their upper limbs are not appropriate for the task, such in the case of winged characters that lack Feather Fingers.

Expect this character to be the kind of individual who goes barefoot so as to keep their feet from being restrained.