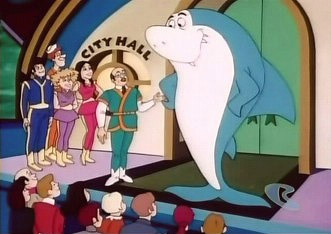 The trope where a whale, dolphin, porpoise, manatee, walrus, seal, fish, or shark walks on its tail-fin (justified for the seal and walrus as those are actually its feet). This trope is especially common in cartoons, since filming this is difficult with a real fish. In reality, tail-fins are rather floppy, and won't support the animal's weight, however, it looks more natural than walking on the pectoral fins (which would essentially be 'crawling'), or on the pelvic fins (which anatomically correspond to a tetrapod's legs).

If the character is a Funny Animal, some writers will just outright turn their tail-fins into straight-up legs. This is most commonly seen in pinnipeds, as unlike most other animals of this example, the rear flippers seen in their skeletons actually resemble that of legs not unlike most other tetrapods (they are indeed legs, not a tail like with other marine mammals as with manatees and cetaceans).

In some settings where they exist, mermaids can also be seen moving about like this, though another common variant would be to have them 'standing' with their tails in a "U-shape", with the fins held off the ground.

A Sub-Trope of Artistic License – Marine Biology. This is a sister trope to Feather Fingers. May also apply to Fish People and Terrestrial Sea Life in animation.