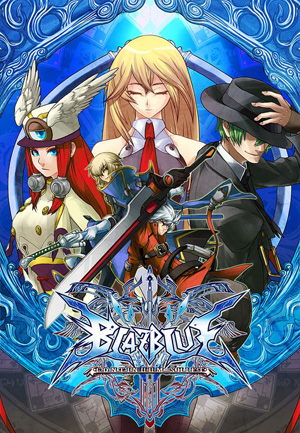 One of the many possibilities... of the Continuum Shift
Advertisement:

Following the events of Calamity Trigger, the static timeline has been thrown into a state of flux from which an infinite number of futures are possible. A number of shadowy factions intend to use this "continuum shift" to bend the future to their will, setting the cogs of an ancient conspiracy into motion.

Unaware of all this, Ragna the Bloodedge aggressively pursues his arch-nemesis Terumi within the walls of Kagutsuchi. Meanwhile, N.O.L. agent Tsubaki Yayoi is ordered to hunt down and execute her unrequited love Jin Kisaragi, and her best friend Noel Vermillion.

Released for arcades on November 20, 2009, exactly a year after the previous game, this update/sequel features two new playable characters: Tsubaki Yayoi, and Hazama (who acts as the Final Boss of the Arcade Mode). It implements several gameplay changes such as adding new moves to the already existing characters, and tweaking many of their existing features to add more balance. Nu-13 has been excised and replaced by an inferior clone called Lambda-11, who plays exactly like her predecessor but more balanced. The stages are also redone, featuring new graphics ala Champion Edition.

The console version was released July 1, 2010 in Japan, July 27 in America and December 3rd in Europe. It once again features Kotoko as the singer for the opening theme, Hekira no Sora e Izanaedo, as well as an insert song from an as-of-now unknown artist. There are three new modes: Legion, which is played like a strategy game, Challenge, which is similar to the challenge modes of other fighting games, and a Tutorial mode where Rachel shows new players how to work the game's mechanics, all while verbally abusing them in her own wonderful way. All of that and a new playable character: Mu-12, Final Boss of the Story Mode.

The game is mostly the same as it's predecessor. It uses a 4 button system: Weak Attack (A), Medium Attack (B), Strong Attack (C), and a Drive Attack, (D) unique to each character. The original arcade release had a total of 14 characters, with four new ones getting added in the console release and, eventually, Continuum Shift II. As of Continuum Shift Extend, the total of playable characters is 19.

BlazBlue Continuum Shift II acted as a balance patch for the arcade and console versions, and featured a new theme song: Shinsou, sung by Asami Imai (Tsubaki's voice actress). A standalone version for the PSP and 3DS also included all three DLC characters, along with Arcade modes for them and Mu-12 and two extra story modes based around the NOL trio and Sector Seven.

BlazBlue Continuum Shift EXTEND, released as a standalone game for arcades, PS3, Xbox 360, Playstation Vita and PSP, once again rebalanced the existing game. It includes all of the content from Continuum Shift II, Story modes for the three DLC characters, and adds Mad Scientist Relius Clover as a new playable character along with his own Arcade and Story modes. It also features a compressed retelling of the Calamity Trigger Story Mode, bonus DLC scenarios, "Unlimited Mars" mode (a Harder Than Hard Boss Rush against Unlimited characters) and a new theme tune (Soukyuu no Hikari, sung by Faylan). In December 2014, EXTEND was released on Steam.

Makoto: "Are you OK? Do you know who I am?"
Taokaka: "Uh… I see… three sets of boobies… and one… cutting board…"
Noel: (utterly humiliated, sobbing) "C-cutting board?! She actually compared me to a cutting board!"
DISTORTION FINISH!