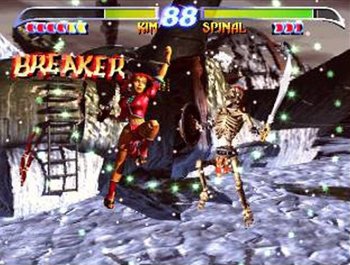 Not today.
"C-C-C-C-C-C-COMBO BREAKER!"
— The commentator of Killer Instinct
Advertisement:

A move or game mechanic in Video Games (mostly present in Fighting Games, but not unheard outside of them) meant to break big chains of hits.

Combos are defined as any combination of attacks where, if the first hit lands, the opponent becomes unable to dodge or block the hits that follow, as they're being attacked too quickly to even recover from hitstun. The ability to string together very long and damaging Combos is a mark of skill among Hard Core gamers, but can also become a potential Game-Breaker if the affected player cannot escape from this chain.

The solution? A specialized game mechanic that allows a player to escape from the middle of a combo so they can retaliate while their opponent is left vulnerable. Depending on the game, this may involve a separate button combination rather than the usual defensive command, or it may incur some kind of cost to discourage players from overusing it, such as relying on a power/defense gauge, or being Cast from Hit Points.

Thus, a truly skilled fighter must not only master the ability to string hits together to make combos, but also the ability to escape from them. Should two players who have mastered Combo Breaking fight head-to-head, the ensuing battle will involve a lot of tactical improvisation, as the two fighters continuously break out from underneath their opponent's attacks.

Since it usually just requires precise timing and/or quick reactions, it's quite the temptation for programmers to make their competitive AI very good at this, in order to compensate for its shortcomings elsewhere. See Computers Are Fast.

Compare Recovery Attack, another ability to break being hit repeatedly.