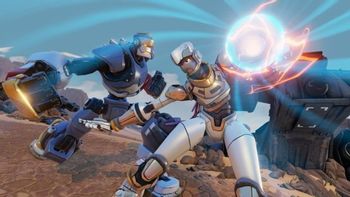 Rising Thunder is a Free-to-Play 2D Fighting Game for PC by Radiant Entertainment, a studio created by Evolution Championship Series co-founders Tom "inkblot" Cannon and Tony "Ponder" Cannon. Street Fighter champion and former Special Adviser for Street Fighter at Capcom, Seth "S-Kill" Killian is involved in its design. In it, players battle each other with Humongous Mecha of varying shapes and styles with pilots from different countries.

Although largely a traditional fighting game, the game is meant to reach a wider audience than usual through a few unique factors:

, with some users being given codes to allow others immediate access. However, the game never made it out of Alpha: after being bought by Riot Games, Radiant Entertainment announced its permanently closing on March 18, 2016

to work on other projects. However, in January 2018 they released an open-source "Community Edition", with basic support for local multiplayer and a player-run servers, so interested players would be able to return to the game in perpetuity.

Nothing to do with the The '80s arcade game Rolling Thunder