Video Game / Rise of the Robots 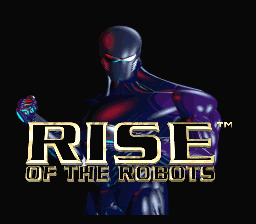 Rise Of The Robots is a fighting game released in 1994 for the IBM PC, Amiga, Game Gear, Super Nintendo Entertainment System, Sega Genesis, 3DO Interactive Multiplayer and Philips CD-i.

The game's premise was dead simple, and by the standards of any beat-em-up, perfectly functional. The Supervisor, a T-1000 Expy with boobs, is the central robot in charge of a large robotics plant. All is going well, until a computer virus suddenly gives her sentience. She transmits the virus to the rest of the plant's robot workers, causing them to kill all the humans inside and try to find a way to connect to the outside mainframe. The only way to prevent The Supervisor from uploading the virus to the rest of the city is to kill her. Enter Coton, a cloned Cyborg programmed to fight his way to the Supervisor's lair and kick her highly textured ass.

If the game has any greater legacy than just being awful, it is that it solved the issue of the increasing number of video game magazines - although not in the way they would have liked.

To try and attract readers, some were giving 'exclusives' of games, promising high scores in return for advance review copies. Some of these games were still in Beta and even Alpha testing, and others would even review based on PC screenshots. Some would diss the game in the review but give scores of 80% and more at the end. Nobody really noticed when a game turned out to be good anyway, but with Rise being so universally bad by any other standards, its exceptionally high 'exclusive' review scores caused a sharp loss in trust for the common news-stand magazine.

A sequel, Rise 2: Resurrection, was released on the PC, Playstation, and Sega Saturn in 1996. This one featured a new cast of characters, on top of the returning robots, and numerous gameplay improvements that were overshadowed by the overall design of the game, that is try to be like two certain other fighting games but betray the mechanics from both in certain ways. Nevertheless, it is more balanced and playable than the first.