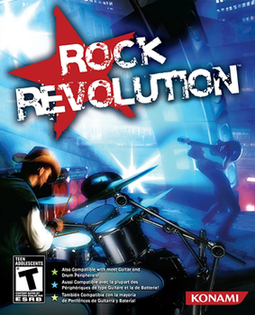 Konami is known as the creators of Drum Mania and Guitar Freaks, the forefathers to many popular American Rhythm Games. However despite this (and failed attempts to market GF in America upon its debut), their arcade versions remained relegated to Asian arcades and those lucky enough to import them.

When rhythm games became a major trend in 2008 thanks to the popularity of Guitar Hero and Rock Band, Konami decided to Follow the Leader and cash in on the craze in 2008 with Rock Revolution, a partial band game (no vocals) developed by Zoe Mode and HB Studios, with no dedicated guitar controller (just use a Guitar Hero or Rock Band one), and a very awkward looking drum kit peripheral. The result? Disaster. A game full of covers, a majority of songs under-charted, and an overall low-quality experience.

Versions were released on multiple platforms, the Xbox 360 and PS3 versions used traditional controllers, the Wii version (which was actually pulled before release somehow) awkwardly used the Wii remotes instead

, and the DS version used the touch screen, plus the microphone for vocals.