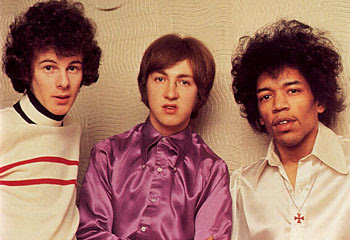 Influenced (among other examples):,

Advertisement:
"'Scuse me while I kiss the sky."
— "Purple Haze", source of the most famous mondegreen of all time

James Marshall Hendrix (Born Johnny Allen Hendrix; November 27, 1942 — September 18, 1970) was an American musician, widely regarded by other musicians, listeners and critics as one of the best and most creative electric guitarists of all time. After playing in back-up bands for artists like Little Richard and the Isley Brothers, he was discovered and managed by Chas Chandler, who took him to London and made him a star as the lead singer and guitarist of The Jimi Hendrix Experience (Which included Noel Redding and Mitch Mitchell).

First achieving success in England, his American career took some effort such as attempting to be the warm-up act as requested by The Monkees, which unfortunately their kid audience didn't care for. Hendrix's domestic breakthrough was at 1967's Monterey Pop Festival, where he managed to upstage The Who having destroyed their instruments by setting his guitar on fire.

After the classic line-up of the Experience broke up, Hendrix formed Gypsy Sun and Rainbows (Which included Billy Cox, Mitch Mitchell, Larry Lee, Juma Sultan and Jerry Velez), which played at the legendary 1969 Woodstock festival. As it happened, bad weather forced numerous acts off the playlist, including Hendrix's friends, the campy retro doo-wop band, Sha Na Na. Hendrix showed what a generous guy he was when he insisted that band perform immediately before him, giving them their big break. Regardless, the moment when Hendrix finally went on his apocalyptic performance of “The Star-Spangled Banner” was a Best for Last treat that pretty much revived a very tired crowd.

The Experience didn't last long after Woodstock and was succeeded by the Band of Gypsys (which included Billy Cox and Buddy Miles). They broke up after two memorable gigs and a self-titled live album, after which Hendrix re-formed the Experience with Mitchell (Billy Cox replacing Noel Redding) in time for the 1970 Isle of Wight Festival. Died early at the age of 27 of choking on his vomit due to alcohol and drug overdose, the second (only around a year after Brian Jones) of several prominent rock artists to die at that age (although his blues roots have led some to say that he merely moved the curse from blues to rock, as the legendary Robert Johnson had died at 27, too).

Hendrix was highly influenced by blues, jazz, R&B, and soul music; his amazing rhythm playing stemmed from his desire to make his guitar sound like an entire R&B backing band with horn section. In turn, he codified techniques and trends many other bands and artists had used, such as amplified feedback (done before by others, but Hendrix almost literally turned it up to eleven), creative use of electronic effects and extended improvisations. Although he arrived in London at a time when there was an entire generation of impressive guitarists reaching the peak of their powers, his peers were pretty quick to acknowledge him as The Ace: Pete Townshend recalled feeling sorry for Eric Clapton in that Clapton wanted to be able to play like Hendrix, but couldn't, whereas Townshend was glad that he himself 'never had any sense that I could even come close'. (The great guitarist Larry Coryell once attempted to beat Hendrix in a cutting contest; according to eyewitnesses, Hendrix blew him off the stage with a single note.) His guitar style was also an influence on many later Psychedelic Rock, Funk Rock, Hard Rock, Heavy Metal, and Alternative Rock (particularly Grunge) acts.

Hendrix's musicianship, his experimental albums that did not stay strictly in one genre of music, and his aforementioned outrageous stage theatrics earned him enough of a reputation to make him one of the most prominent rock performers of the late '60s. Not for nothing was he selected as Woodstock's last artist to perform, after all. Ironically, this popularity wasn't quite reflected on radio in his lifetime, as related in a documentary produced after his death. Black radio, at the time entrenched in the likes of Aretha Franklin, James Brown and the roster of Motown Records amongst other, more straightforward rhythm and blues artists, wanted little to do with his heavy rock guitar sound. And many white rock radio stations, places one might have thought would be a more natural home for his songs, simply thought he sounded "too black." Contrasting this with his frequently standing-room-only crowds says a lot about the tastes of radio programmers compared to their audiences.

While many today mention him as the most influential guitarist of the era, his reputation was only consolidated after his death; his friend and rival Eric Clapton commemorated him with a cover version of Hendrix's song "Little Wing".note This was actually an accidental commemoration: Clapton's then-band Derek and the Dominoes had worked up a cover version of the song which they planned to release simply because they liked it, but Hendrix died after they'd recorded it but before it came out, so in context it seemed like a requiem. Nevertheless, many guitarists who came after him were indeed influenced by both his work and his on-stage theatrics, including Ernie Isley, a latter-day member of The Isley Brothers, the same group Jimi used to play back-up for, and Brian May of Queen, whose first band in college actually opened for Jimi in 1967. His most conspicuous if not most profound legacy is to have inspired generations of metal guitarists, although bizarrely enough, Eddie Van Halen, the most Hendrixoid of them all, claims that his greatest influence was Clapton. At the time of Hendrix's death, he had plans to record with Miles Davis and to study music in more depth, possibly performing less and composing more; although it's sad to think of what was lost, Hendrix's expressive playing and extraordinary musical imagination continue to inspire musicians in all fields of music.

Two of his most famous performances are "Purple Haze" and his cover of the Bob Dylan classic "All Along the Watchtower". He is listed as the greatest guitarist of all time on Rolling Stone's list of 100 greatest guitarists.

His group The Jimi Hendrix Experience was inducted into the Rock & Roll Hall of Fame in 1992 and the UK Music Hall Of Fame in 2005.

"Excuse me while I kiss the tropes!":

The story of life is quicker than the wink of an eye. The story of love is hello and goodbye. Until we meet again.