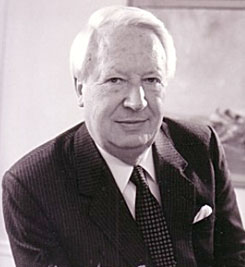 "I have always had a hidden wish, a frustrated desire, to run a hotel."
Advertisement:

Sir Edward Richard George "Ted" Heath KG MBE (9 July 1916 – 17 July 2005) was a British politician who served as Prime Minister of the United Kingdom from 1970 to 1974, both succeeding and preceding Harold Wilson, and a pro-European Conservative.

"Sailor Ted" as he was sometimes known (other nicknames included "The Grocer" or "Grocer Heath", after negotiating for the UK at a European food prices conference) took Britain into the EEC, mainly because Charles de Gaulle wasn't around any more to stop him as he did with Harold Macmillan and Wilson.

His early career saw him as President of the Oxford Union (the University's debating society and a fairly frequent stepping stone on the road to Downing Street) and an opponent of Neville Chamberlain's appeasement policies towards Adolf Hitler.

He fought in World War II and once had to organise a firing squad. Some Soviet leaders blew this incident out of proportion and thought he had been the "Political Officer". Before that, he travelled through Europe, attending the 1937 Nuremberg rally, where he met Hitler, Hermann Göring, and Heinrich Himmler ("the most evil man I have ever met"), visited a besieged Barcelona during the Spanish Civil War, and went to Germany again in the summer of 1939 — indeed, he had to cycle to Holland to return to the UK, crossing the border hours before it was closed. These experiences instilled in him a lifelong commitment to a united Europe.

In 1950, Heath was elected to Parliament for the first time. He ended up serving 51 years in the House of Commons (as MP for Bexley until February 1974, for one of its successor ridings, Sidcup, until 1983, and lastly for Old Bexley and Sidcup) until his retirement in 2001. His successor in that seat, Derek Conway, only spent nine years as he resigned following a scandal which essentially involved registering his relatives as employees and paying them for work they didn't do.

In 1965 he became the first Conservative leader to be elected by his fellow MPs. He led them to a loss in the 1966 election, but went on to an unexpected win in 1970, being mostly supported by housewives disgruntled with inflation. In his first year in office, he completed the transition from the Old British Money of pounds, shillings & pence to decimal coinage.

Heath might have had the most unfortunate premiership (at least until Theresa May's) in British history. During his term, The Troubles escalated in Northern Ireland, particularly after the Bloody Sunday incident in January 1972. His attempts to mediate the conflict were unsuccessful, instead causing a split with his Ulster Unionist allies. He also had to contend with a period of economic decline inherited from Wilson, marked by unemployment hitting one million for the first time since the war, wildcat strikes, inflation, conflict with increasingly militant mining unions, property speculation and competitive decline, falling behind West Germany and France. Heath was also propense to be attacked with ink or paint. Not helping matters was his inability to 'reach' the average voter (he once referred to his voters as "shits, bloody shits and f***ing shits"), especially in comparison to the deceptively charismatic Wilson. His middle-class background and moderate 'One Nation' stance made him not very popular in the party, which (under the influence of people including Enoch Powell, Keith Joseph, and Margaret Thatcher) was rapidly diverging from the post-war consensus.

As with Macmillan (and every subsequent Tory PM), his career at the top of British politics would be undone by the "European question". Heath claimed victory for British entry into the Economic Community (which was not endorsed by public referendum as it was in the other accession countries), a rather Pyrrhic Victory considering that the public was indifferent at best,note (contemporary polling showed that the British public probably would have rejected accession, which is why he didn't allow a referendum, which gave Wilson an opening to promise one in his 1974 manifesto) while the move was resisted by many of his MPs — especially his bitter rival Powell, who never forgave Heath for kicking him out of the Shadow Cabinet after his "rivers of blood" speech in 1968. It's telling that none of Heath's successors at Number 10, Tory or Labour, was as openly Europhilic as he, excepting perhaps Tony Blair (and even he couldn't bring Britain into the Eurozone).

In late 1973 his bad luck reached a peak as the miners went on strike again, just as OPEC enacted the oil embargo and the England team failed to qualify for The World Cup. In response, Heath enacted the Three-Day Week — homes were asked to reduce fuel consumption, most businesses were limited to using electricity just three days a week, and television networks had to sign off at 10.30 p.m. He also called an election for 28 February 1974, hoping to get a mandate to face down the strike. This instead resulted in a hung parliament wherein the Conservatives won the most votes, but Labour won the most seats. After Heath failed to strike a deal with Jeremy Thorpe's Liberals, Harold Wilson became PM once again. Heath is the most recent PM to enter office via one general election, by leading the party that won the most seats, and then leave office via another when another party won the most seats.

While his premiership coincided with Britain's "sick man of Europe" period, Heath's legacy has been revisited in a more positive light during the 21st century, with most of his political failures being considered to be aftereffects of Wilson's policy mistakes and the rest being chiefly due to communication problems. Many historians have also noted his tendency to stick to his guns, a trait that was slowly disappearing from Whitehall. Conversely, he's not too popular among traditional right-wing Tories, who look unkindly on his taking the country into Europe and often blame him for sowing the seeds that would lead to the move towards centrism decades later on David Cameron's watch. With Britain's departure from the European Union in 2020 undoing his signature and crowning achievement, there is also some question as to his lasting legacy.

He never got on with Margaret Thatcher, openly criticising her economic policies. She had served under him as Secretary of State for Education and Science and defeated him in the 1975 party leadership battle, for which he never forgave her. Instead of going to the House of Lords like almost all his immediate predecessors and successors as PM would, Heath remained in the House of Commons seemingly all the better to keep a baleful eye on Thatcher, glowering from the backbenches in a decades-long state of dudgeon nicknamed "The Longest Sulk in History". He would in fact remain in the Commons for over a decade after Thatcher lost the premiership (only standing down as an MP aged 84, nine years and two Parliaments after she did) and ended up as Father of the House — the MP with the longest continuous tenure.

Ted Heath never married, being the most recent Prime Minister to be a bachelor (one of only four, after the Earl of Wilmington and William Pitt The Younger in the 18th century and Arthur Balfour at the start of the 20th century), and he was also the last childless PM until Theresa May.

He did though have interests outside politics in a manner rare among recent Prime Ministers. A skilled sailor (as his nickname should imply), he won the Sydney to Hobart Yacht Race only the year before becoming PM. He was also a talented amateur musician as a pianist and organist, was responsible for the installation of a Steinway grand piano in Number 10, and conducted orchestras a few times including the London Symphony Orchestra.