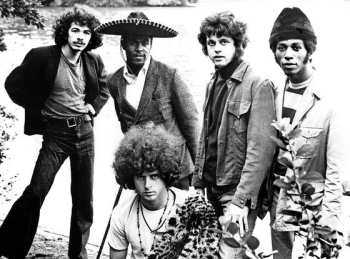 And it's just like the ocean under the moon
Oh, it's the same as the emotion that I get from you
You got the kind of lovin' that can be so smooth, yeah
Give me your heart, make it real, or else forget about it
"Smooth" featuring Rob Thomas
Advertisement:

Santana is a U.S. Latin rock band formed in 1967 by lead guitarist and namesake Carlos Santana. They first gained recognition after playing at Woodstock, and became famous for pioneering a fusion of rock, salsa and jazz music. They became pioneers of the Chicano rock sound along with War and Malo (featuring Santana's brother Jorge Santana).

Their popularity dwindled after The '70s but they made a huge comeback in the late '90s with the Supernatural album and the hit single "Smooth."

Throughout their history Carlos Santana has been their only permanent member. The Revolving Door Band approach was preferred by Carlos Santana, who desired working with a large lineup of top musicians, including percussionist Armando Peraza, bassist David Brown, and drummer/singer Buddy Miles. Also worth noting is that in 1973 former Santana members Neal Schon and Gregg Rolie formed Journey, which started out as a Santana-like band but went on to become one of the biggest Arena Rock bands of The '80s.

Also, from the Supernatural album through All That I Am lead vocals have (mostly) been provided by a rotating roster of guest musicians.