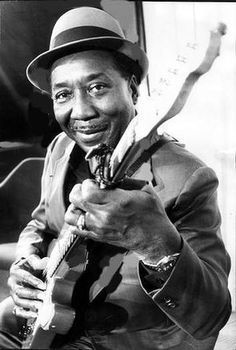 McKinley Morganfield (April 4, 1913 – April 30, 1983), better known as Muddy Waters, is one of the icons of Blues music. He became famous in the 1940s for recording blues music that wasn't sad and melancholic, but sexy, boastful, raw and full of energy. He was the first blues musician to replace the acoustic music the genre was known for and adopt electric guitars and more prominent percussion in his songs. Throughout the 1940s and 1950s he had several hits: "I Can't Be Satisfied", "I'm Your Hoochie Coochie Man", "Mannish Boy", "Rollin' Stone Blues", "Got My Mojo Workin'", "She's Nineteen Years Old", "I Just Want To Make Love To You",... which attracted crowds of people. It has been said that Elvis Presley based his hip shaking on Muddy doing the same thing during his stage shows.

In fact, Muddy's electric guitar sounds, catchy beats, virile voice and sexual lyrics provided the entire backbone of Rock & Roll. Countless Blues Rock bands wouldn't exist without his influence. The Rolling Stones were named after his song "Rollin' Stone Blues", and their hit "(I Can't Get No) Satisfaction" was inspired by "I Can't Be Satisfied". Bob Dylan's "Like a Rolling Stone" from Highway 61 Revisited also took its inspiration from "Rollin' Stone". Muddy was also Covered Up by artists as diverse as the Stones, Dylan, The Yardbirds, Eric Clapton, Jimi Hendrix, Cream, Frank Zappa, Captain Beefheart, Steppenwolf, The Band, Canned Heat, Humble Pie, The Allman Brothers Band, Motörhead, Led Zeppelin, AC/DC, Spacemen3, and others. Muddy himself performed "Mannish Boy" alongside The Band in their farewell concert film, The Last Waltz.

In 2004, his song "Hoochie Coochie Man" was added to the National Recording Registry.