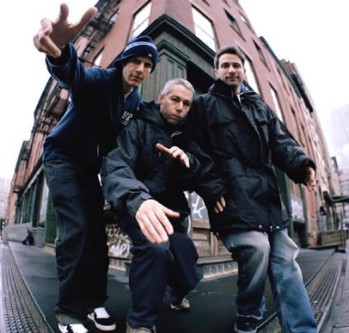 Listen alla y'all, it's sabotage!note L to R: Mike D, MCA, Ad-Rock
Now here's a little story I've got to tell
About three bad brothers you know so well
It started way back in history
With Ad-Rock, MCA, (and me) Mike D.
— "Paul Revere"
Advertisement:

The Beastie Boys were a famous rap trio that was around from 1979 to 2014, enjoying critical and commercial success throughout their career, helping invent and popularize Rap Rock (alongside Run–D.M.C.), playing an important role in the popularization of hip-hop as a whole (partly by being white), being one of the few rap groups whose members play instruments, being one of the main influences on Alternative Rock before they even actively tried to court the genre's fans with their later work, and being the first white rap group to gain massive success.

Not too bad for three Jewish kids from New York City.

Initially formed as a hardcore punk band in 1979, the group changed its name to "The Beastie Boys" in 1981. Its initial line-up had Michael "Mike D" Diamond on vocals, John Berry on guitar, Adam "MCA" Yauch on bass and Kate Schellenbach on drums. Supporting such famous bands as Bad Brains, Dead Kennedys, The Misfits and Reagan Youth, the band recorded its first hardcore EP, Pollywog Stew in 1982. Berry left in 1983, being replaced by Adam "Ad-Rock" Horovitz, and the group recorded its first rap song, "Cooky Puss". Gradually, they created their specific style, quickly switching between rapping, shouting and line-trading.

The now-rap-oriented Beastie Boys were signed to Def Jam in 1984. Schellenbach left, Rick Rubin took over as producer and the classic line-up of Mike D, MCA and Ad-Rock became permanent. A few singles followed, such as a contribution to the Krush Groove soundtrack named "She's on It", "Hold It Now, Hit It" and the double A-side "Paul Revere/The New Style", along with opening spots for Public Image Ltd., Madonna and a joint tour with Run DMC, LL Cool J, Whodini and the Timex Social Club.

Burgeoning success or not, the Beastie Boys were still undoubtedly a Token White among The '80s rap scene. However, they sidestepped any problem of credibility within the rap community by aiming their music directly at an audience of rock fans that probably didn't really care about rap. Their debut album, Licensed to Ill (1986), relied on a simple recipe of pounding beats, loud guitars, punk riffs, Led Zeppelin samples and hilariously over-the-top lyrics full of Bacchanalian excess, guns, drugs, alcohol abuse and tons of boasting about the Boys' prowess with the ladies and similar matters. Ill sailed straight to #1 on the US charts, becoming the first rap LP to do so, attracted predictable whining from people who didn't understand that it was all an elaborate joke, sold over 10 million copies and produced a massive hit single: the goofy Punk Rap "(You Gotta) Fight for Your Right (To Party!)", a parody of "attitude songs" with guitars by Kerry King from Slayer, accompanied by a video depicting the Boys crashing a dorky party and making all hell break loose.

In the resulting tour, the Boys did all they could to live up to their self-imposed Memetic Badass status, trashing hotel rooms, attracting lawsuits and arrests (including a gig in Liverpool where Ad-Rock was arrested after only 10 minutes) and having a set that included female members of the audience dancing in cages and giant inflatable motorized penises. In the aftermath, the Beasties signed to Capitol Records and set to work with producer duo The Dust Brothers on their next album, which would be a change of pace towards more funky, sample-heavy material. The result was Paul's Boutique (1989), routinely considered their masterpiece of Sampling as art - nearly 105 songs were sampled, from sources as varied as

The Beatles, hip-hop, funk and soul tracks, Led Zeppelin, Pink Floyd, Elvis Costello, Isaac Hayes, The Ramones, the Jaws theme, the "Shower Theme" from Psycho and others, with the result being 15 catchy, diverse tracks ranging from funky hip-hop to rap-rock ("Johnny Ryall", "Looking Down the Barrel of a Gun"). While not matching Ill's monumental commercial impact, it did sell well enough and drew critical acclaim where the band was previously dismissed as One Hit Wonders. It's still considered one of the best hip-hop and alternative music albums ever made, and it arguably saved the Beasties from becoming the One-Hit Wonder that Licensed to Ill had suggested they would be.

One of the tracks on Boutique, "Looking Down the Barrel of a Gun", featured live instrumentation, with MCA on bass and Ad-Rock on guitar. Their follow-up album, Check Your Head (1992), saw the Boys pick up their instruments again (Mike D on drums, Ad-Rock on guitar, MCA on bass), accompanied by Mark "Money Mark" Ramos-Nishita on keyboards and longtime collaborator Mario "Mario C." Caldato Jr. as engineer and producer. This was another New Sound Album, seeing the Beasties engage in a game of musical Mix and Match, putting together hip-hop with a ton of samples (including the one they're most proud of, one from "Just Like Tom Thumb's Blues" by Bob Dylan), jazz- and funk-inspired jamming, instrumentals and a punk rock cover of "Time for Livin'" by Sly and the Family Stone. Head also marks a crucial point in the band's evolution, being the moment where they left behind their earlier over-the-top Badassery: while they would still boast from now on, they would be more blatantly humorous and not discuss ingesting of every controlled substance known to man, sex, and wacky fratboy hijinks. They also found the time make their label Grand Royal Records an actual label (one of their first signed bands was Luscious Jackson, featuring their old bandmate Kate Schellenbach) and publish Grand Royal Magazine, credited with coining the term "mullet" and giving the Sneaker Pimps their name.

Evolution continued with Ill Communication (1994), which built on the musical smorgasbord of Head and managed to return the Boys to #1 on the charts. This was mostly achieved through another massive hit single, the furious, one-chord Rap Rock of "Sabotage", with a Spike Jonze-directed video parodying 1970s cop shows. The Beasties continued touring but became more involved with charity and political activism - MCA had converted to Buddhism in the meantime, organising the first Tibetan Freedom Concert in 1996 and including the Beasties' first overly political/spiritual tracks, "The Update", the instrumental "Shambala" and "Bodhisattva Vow".

Adding Michael "Mix Master Mike" Schwartz as DJ and returning to New York after nearly a decade in California, The Beasties churned out Hello Nasty (1998), which added an eighties electro-funk influence to the huge Mix and Match of genres from Head and Ill, and sneaking in some Brazilian, Latin, lounge and dub influences. This album's big hits were the Rachmaninoff-sampling "Intergalactic", "Body Movin'" and the minimalist "Three MCs and One DJ". The first two had their own requisite humorous videos, "Intergalactic" being a parody of kaiju films and "Body Movin'" parodying the film Danger: Diabolik, (famous as the last episode of Mystery Science Theater 3000). The Boys received the MTV Video Vanguard Award that year and "Intergalactic" won the VMA for Best Hip Hop Video in 1999. They used both appearances to make lengthy, political speeches about how Muslims aren't terrorists (for the former) and the debacle that was Woodstock '99 (the latter). They also took the time to appear in the Futurama episode "Hell Is Other Robots" in 1999. However, MCA was unavailable at the time of the recording, so he was voiced by Ad-Rock.

A long hiatus followed, filled by side-projects (Mike D's Country Mike project, Ad-Rock's BS 2000), a planned tour with Rage Against the Machine that was cancelled after Mike D was seriously injured in a biking accident and organising further Tibetan Freedom Concerts. Also, the group's label Grand Royal Records collapsed in 2001 due to mounting debt issues. Its non-Beastie Boys assets and back catalog were purchased by fans who started GR2 Records.

The first new song by the band appeared in 2003, the Protest Song "In a World Gone Mad". The all-rap, self-produced To the 5 Boroughs (2004) followed. While it again hit #1 on the US charts, the minimalist sound, heavy old-school hip-hop influence and explicit political slant to the lyrics divided the fanbase.

The Beasties then created their first all-instrumental album, The Mix-Up (2007), which continued mining the funk-, soul-, dub-, Latin- and jazz-influenced grooves that had been present on their albums since Head, with additional contributions by Money Mark and percussionist Alfredo Ortiz. The band toyed with the idea of releasing a remix album with vocals by other artists, but this was dropped. The album was supported with appearances at various festivals such as Roskilde, Bestival, Electric Picnic and Southside.

The group completed their new album, Hot Sauce Committee, Pt. 1, with a Pt. 2 due later formed of left-overs from the sessions. However, MCA had a cancerous tumour discovered in his throat and had to undergo surgery, causing the planned tour to be cancelled and the Hot Sauce Committee set delayed. Hot Sauce Committee, Pt. 1 has been postponed indefinitely, while Pt. 2 (with an almost-identical tracklist to Pt. 1) was released on May 3, 2011. Additionally, a pseudo-sequel to the "Fight For Your Right" music video (featuring the first single from Pt. 2, "Make Some Noise") was released the same day as the album.

Adam "MCA" Yauch passed away on May 4, 2012, following a three-year battle with cancer. The group officially disbanded two years later. Ad-Rock and Mike D have hinted that they might still work together in the future, but not under the "Beastie Boys" name.

In 2018, Mike & Ad-Rock released a coffee-table autobiography, Beastie Boys Book, chronicling their history and also serving as an extended tribute to MCA.

Let me clear my tropes!!!

Okay, that's the end of it for tonight, folks. It's good to hear y'all out there. Come back next week; have some sheets for ya. Remember, on your way home..... if you're drivin', don't drink, and if ya drink, don't drive.