Film / Beasts of No Nation 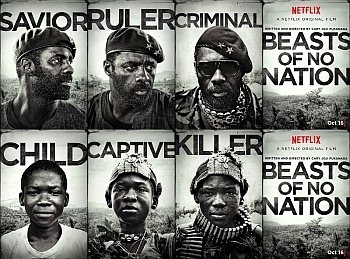 Does a boy have two eyes to see? A boy has hands to strangle and fingers to pull triggers. A boy is very, very dangerous. You understand me?
— The Commandant
Advertisement:

Beasts of No Nation is a dramatic film written and directed by Cary Fukunaga, based on the book of the same name, and was released on Netflix in October 2015.

In an unnamed West African country, a young boy named Agu (Abraham Attah) witnesses military forces beginning to occupy the small town where he and his family live. After his father, brother and grandfather are murdered by occupying forces, Agu flees into the jungle, where he is discovered by a group of Child Soldiers led by the Commandant (Idris Elba). Agu is conscripted into the ragtag army and begins to participate in raids on the occupying forces while struggling to keep what's left of his soul.

The film is notable for being Netflix's first original movie.