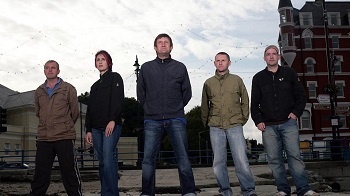 The Beautiful South were a British Sophisti-Pop band active from 1988 to 2007. Variously classed as Jangle Pop, Northern Soulnote A flexible term first applied to American R&B records and the provincial British scene that sprang up around them. and Alternative Pop Rock, as well as having a mid-'90s renaissance/peak parallel with Brit Pop, the Beautiful South formed after the breakup of the Housemartins, an Indie Pop group that had gained traction in the mid-1980s — including an unlikely UK Number One single with an A Cappella cover of the Isley-Jasper-Isley song "Caravan Of Love". While the Housemartins' former bassist Norman Cook went in a house/funk direction that would eventually lead him to become Fatboy Slim, leader Paul Heaton started a new band that would be more influenced by Burt Bacharach, soul and jazz. He pulled Housemartins drummer Dave Hemingway up front with him to serve as a secondary lead vocalist.
Advertisement:

The band is best known for their biting wit and mastery of Lyrical Dissonance: Heaton and guitarist Dave Rotheray often wrote pleasant-sounding pop tunes paired with lyrics that were dark, satirical, political or otherwise atypical in some fashion. Depending on who you listen to, they were almost equally lauded and derided for this deployment of what was most frequently called "irony" under the cover of sweet melodies, leading to a not insubstantial Hate Dom as well as huge success.

The band scored big early successes with the likes of their Heaton-sung debut No.2 single "Song For Whoever", "You Keep It All In" (both 1989) and the chart-topping duet "A Little Time" (1990) sung by Hemingway and Corrigan. Their commercial fortunes thereafter seemed to be on the gradual wane however, until the late-1994 release of Greatest Hits Album Carry On up the Charts: The Best of the Beautiful South unexpectedly went stratospheric — it became the second-best selling album of the year, and with eventual 6x platinum status it has often been claimed that 1 in 7 UK households owned a copy. With the simultaneous rise of Brit Pop also bringing guitar-bass-drums music back into the chart mainstream, subsequently the group had its first Top 10 singles in over half a decade with the Abbott-fronted "Rotterdam" and "Don't Marry Her" then their biggest hit in 8 years with the Heaton-Abbott duet "Perfect 10", along with two more multi-platinum Number One albums, before slipping oddly quickly and quietly from million-selling ubiquity into becoming a fan-only act around the turn of the millennium.

The band broke up amicably in 2007, wittily subversive to the end by citing the cause as "musical similarities." Since then, members Hemingway, Wheeler and Dave Stead have toured with other musicians as The South and the New Beautiful South, Heaton has recorded several solo albums and also reconvened with Jacqui Abbott, leading to the pair recording and touring again as a duo.

I love you from the bottom of my troping case...